I hope you’re sitting comfortably with a cuppa (or equivalent).

Awesome authors
Now, I think awesome authors is a GIVEN when going to a book event BUT it is such a wonderful experience meeting these wonderful humans and getting to talk to them. There were SO MANY authors there that I admired, whose books have had a lasting impact on me that I was initially quite overwhelmed. The list was as long as my arm and the fact that I was going to get to meet them made me quite emotional. It goes without saying that there was a lot of fangirling going on, but being the awesome humans that they are they were all incredibly kind and some even fangirled back at me. Shout out to Tanya Byrne for fangirling at me for tweeting her so much about her story in #ChangeBook. As a reader you get to read these incredible collections of words that an author has produced and to get to go up to them and say this is my favourite part, or these character makes me so angry, or this part changed my life is an incredible part of the reader/author relationship. Kelly and I waited around a while for one of our faves Alwyn Hamilton, only to tell her that if she kills one of her characters we will NOT be her friend. I could talk for hours about the conversations I had with authors and how much I fangirled but no one needs to read that. (If you go to book things and see an author you love, TELL THEM). 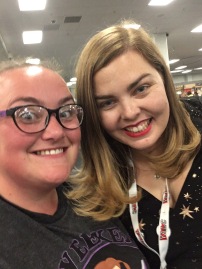 Melinda Salisbury
Speaking of awesome authors, my queen was there. #QueenMel. For those of you who are unaware who this awesomely wicked human is, Mel is the author of my favourite trilogy of all time: The Sin Eater’s Daughter/The Sleeping Prince/The Scarecrow Queen. Now poor Mel puts up with me ALL the time being her number 1 fangirl, so when the schedule told me there was going to be a workshop, I NEEDED to be there. Kelly and I were very lucky to be in the queue early enough on the Saturday to put our names down and be in the chosen 10 to get into the workshop. It was brilliant fun. Her workshop was ‘Books to Bags‘ and we used ACTUAL TSED hardback books to make them into bags. The workshop was a lot of fun, although I’m not sure who allowed Mel to handle a staple gun. It was a gorgeous, informal environment to talk to her and a few others in the workshop. The workshop was filled with broken staple guns, talks of weapons, and laughter – a perfect Saturday morning activity. Aside from the workshop, I got to hear Mel talk a few times and even managed to bag myself a Team Mel badge (even though I wasn’t on Team Mel for the quiz… I AM Team Mel in life though). The signing queue for Mel was of epic length but I had 1 copy of TSP to be signed so we waited in the queue. She is one of my favourite humans. Thanks to Mel for dealing with my fangirling this weekend (and forever) 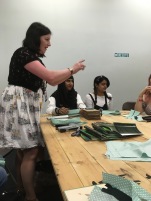 Debut author talks
Yesterday I talked about the talks in general but 2 of my favourite talks were the New Voices talks. The first panel of each day included some brilliant new, debut author talks. When the schedule was announced, I scanned the New Voices talks in awe. I had read quite a few of the debut books, so going to hear the authors talk was a given. We got to hear about their journeys to becoming published, their inspirations and what surprised them about being published. I loved that all of their journeys were different and that the one thing that came out from all of them was that the book they have had published is a book that was special to them. These panels were only half an hour, chaired by the gorgeous Katie Webber, but they could easily have been hours long and I would’ve been happy! A few highlights included meeting Alice Broadway (gorgeous human and author of Ink), Harriet Springbett (who is a SundayYA regular and an all round gorgeous human), Karen Gregory (creator of Countless, which will break your heart) and Tamsin Winter (author of Being Miss Nobody, perfect for teenagers). Debut author talks are always great to go to because they will introduce you to new authors and new stories. 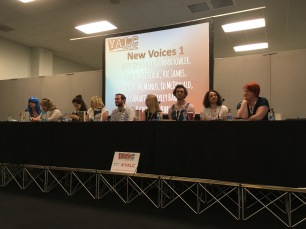 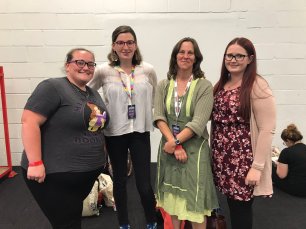 Non’s headshave
As #QuizYA was such a winner, Non had raised enough money to mean she had to have her head shaved. This delight came on Saturday night, after all of the panels had finished. The scene was set for an epic headshave in the name of charity. Authors and fans could pay £5 to cut a bit of Non’s hair off before the shave and PEOPLE DID. It was hilarious. So picture the scene: Non with hair cut off (Mel took GREAT JOY being first cutting hair), head being shaved by the lovely Carlie Sorosiack (If Birds Fly Back author) and almost 200 people watching this happen… only for Benedict Cumberbatch to walk past. BENEDICT CUMBERBATCH. HIS FACE. IT WAS BEYOND HILARIOUS. THERE WAS PANDEMONIUM. The head shaving had to be paused for a minute as everyone was laughing too much. Cumberbatch probably thought “yeah we’ll go this way, there’ll be no one there or they’re just bookish people, they’re chill” ONLY TO SEE 200 people watching a head shave. His face was a picture. If you search on twitter, I can guarantee you’ll see his face (side note: he became a YALC wanderer on the regular. I must’ve seen him about 7 times over the weekend, he said “good morning” to me at one point). The gorgeous Lucy Saxon took over the head shaving in the end, all whilst cosplaying. (Big shout out to Saxon’s cosplaying… Scorpius Malfoy on Sunday too. Brilliant) 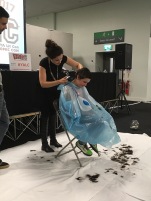 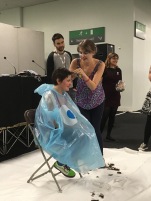 Massive congrats to Non for raising so much money for charity. I think the last total I saw was about £2,800. Also, Non ROCKS the shaved head look.

Books
Yes, yes, I know. I know. I went to a book convention, there would be books. BUT THERE WERE BOOKS. It was like book heaven. HERE HAVE THE BOOKS. HERE ARE SOME FOR FREE. READ THIS. HERE IS A SAMPLER OF A BOOK. There will be a blog post about my YALC haul, so I won’t go on for hours about it here BUT I must mention it. There were a few samplers I needed to have when I heard they were announced, so I gravitated towards those stalls first. Massive props to the people on the stalls, who designed them and who manned them, they did a brilliant job all weekend. I managed to get a few proofs of books which I am SO excited for (one in particular, I hassled the people for 2 days before the announcement). I’m hoping to do some ARCs for August so watch out for those. Come back in a few days for more details of the books I acquired. 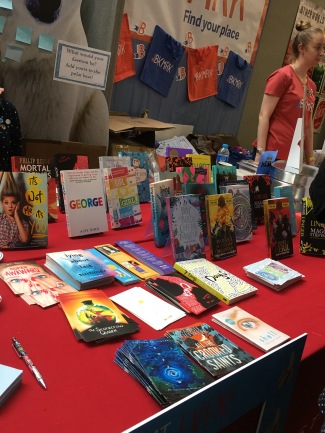 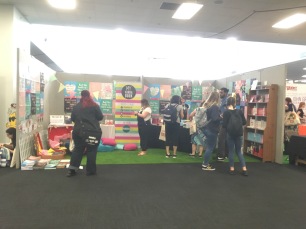 Okay, that’s enough words for today. I hope you’re still awake. There is one more highlights post to come. I will be back tomorrow with that post. YALC haul will be up next week!