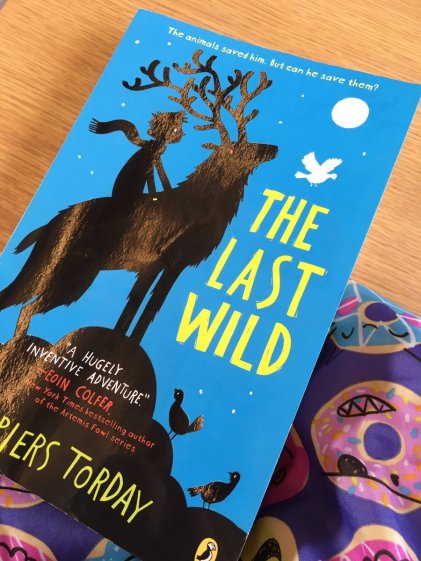 “In a world where animals no longer exist, twelve-year-old Kester Jaynes sometimes feels like he hardly exists either. Locked away in a home for troubled children, he’s told there’s something wrong with him. So when he meets a flock of talking pigeons and a bossy cockroach, Kester thinks he’s finally gone crazy. But the animals have something to say. And they need him. The pigeons fly Kester to a wild place where the last creatures in the land have survived. A wise stag needs Kester’s help, and together they must embark on a great journey, joined along the way by an overenthusiastic wolf cub, a military-trained cockroach, a mouse with a ritual for everything, and a stubborn girl named Polly. The animals saved Kester Jaynes. But can Kester save the animals?”

My twitter friends had been talking about this book forever, but as usual I just hadn’t got round to buying it/reading it. I decided that, since I was going to be surrounded by YA books forever at YALC, I needed to take an MG book to even the score (ha!) I read it on the train down and the train home from London and I can tell you now it is not a train book, unless you’re OK with crying in public. (I am, the man beside me was most concerned however).

The Last Wild follows Kester, a young man who’s living in a sort of prison/boarding school set up, and his adventure to save the last wild. There’s animals aplenty in this book and they’re all as wonderful as the last. There’s not only Kester and his animal friends but there’s Polly too: she’s stubborn, fun and knows a lot about trees and survival. This strange gang of saviours go on their quest to stop the animal world becoming extinct – most of the animals have gone, there’s very few left and it’s Kester’s job to save them. He’s not up to the challenge. How is he, a young boy, going to help the stag and the crazy white pigeon and the grumpy old cat (and co)? How could he possibly do it? The stag broke my heart.

Plus there’s a villainous villain in this story. He kind of scared me. I wouldn’t want him to be in my story. No thanks, no siree.

I absolutely adored this book and I am so glad I decided to pick it up and take it with me. I full on wept on the train (the man beside me actually asked me if I was ok!). It’s perfect for lovers of adventures. There’s definite messages in this story and it’s so perfect for kids – stand up for what’s right, don’t be afraid and bravery comes in all shapes and sizes. I can not wait to read the next one (when my heart is ready!)

Have you read The Last Wild?
What did you think of it?
Which of the animals was your favourite?

Let me know in the comments or on twitter! Twitter teachers love this book! We want to talk about how good it is!