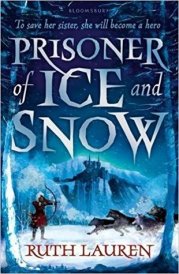 Thanks for having me along to talk about researching and drafting Prisoner of Ice and Snow.

Shall we start at the start with the research? (I’m using this term loosely since the idea began when I was watching Prison Break with my son). I wondered what that sort of story would be like if it was about two young sisters instead. After that I thought about where I could place the sisters to make their escape from prison even more challenging. I wanted an unforgiving climate and terrain in a cold, snowy, frozen world where the elements themselves could cause problems for the characters and bleed through into every part of the planning Valor has to do to break her sister out of prison.
Once the setting was fixed in my mind, the details had to reflect the landscape—the animals that inhabit it, the clothes the people need to wear, the food they might be able to access. I drew on elements of the Russian landscape and traditional clothing, but my editor was brilliant at helping me think about other aspects that add to making the world feel real—like special celebration days in the city, the history of the prison and the geography involved with surrounding lands and how they might impact on the story.
I wanted the sisters to inhabit a matriarchal world where only women can rule and where it would never occur to them that positions of power weren’t open or available to them. They don’t have to struggle or overcome to gain those positions and they see women in every role I put in the book—from ruler to doctor to prison guard to hunter.

On to drafting!
I always draft the same way, and Prisoner was no exception. I write a pitch first before I do anything else, so I set to work writing a query letter that sketched out the biggest problems. I like to use this formula as a basis (I’m pretty sure it came from Janet Reid’s Query Shark blog).
– What does the main character want?
– What’s going to stand in her way?
– What choice will she have to make?
– What terrible thing will happen if she chooses A/what terrible thing will happen if she
doesn’t?

Once I’ve written the query letter I like to frown at said query letter for several days whilst perfecting it (and maybe moaning that I can’t write query letters, they’re too hard, who even invented them anyway?) I think I’ll always do this, even though I already have an agent and maybe no one will ever see the letter. A tight query makes a great basis for expanding into a coherent book.
After that I elaborate on the query, making it into a loose outline using a screenwriting
framework a friend once gave me (thanks Deb!) which splits the story into three Acts and again tends to pull the idea into a coherent story. At this point I might write down specific scenes in some detail and usually some lines of dialogue pop into my head too. Things will get vaguer and hazier towards the end of the outline whereas the first chapters will be full of detail.

Other things I like to do:
– Make a Pinterest board with images of how I see the setting or specific images (like the ice sculptures in Chapter 1 of Prisoner).
– Despair of ever being able to figure out the plot in a fun and satisfying way (maybe I don’t like doing this one per se, but it always seems to happen).
– Sit down to work but go on the internet for seven hours instead.
– Then on the outline, I’ll fill in the individual chapters (three at a time) (no, I’ve no idea why. It just happens), then I’ll, you know, start writing the book. Typically I try to write 1000 words a day when I’m drafting, filling in later chapters in more detail on the outline as I go.

And so on, until THE END! 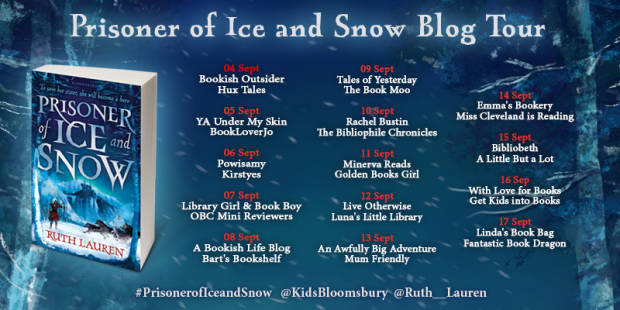 Prisoner of Ice and Snow:
“Valor is under arrest for the attempted murder of the crown prince. Her parents are outcasts from the royal court, her sister is banished for theft of a national treasure, and now Valor has been sentenced to life imprisonment at Demidova, a prison built from stone and ice. But that’s exactly where she wants to be. For her sister was sent there too, and Valor embarks on an epic plan to break her out from the inside. No one has escaped from Demidova in over three hundred years, and if Valor is to succeed she will need all of her strength, courage and love. If the plan fails, she faces a chilling fate worse than any prison”

Information about the Book

Ruth Lauren lives in the West Midlands in England with her family and a lot of cats. She likes chocolate, walking in the woods, cheese, orchids, going to the movies, and reading as many books as she can. She’s been a teacher and worked in lots of different offices, but she likes writing best. Prisoner of Ice and Snow is her debut novel.