I know it’s Thursday and we normally have ThursTAG, but today I have something even more special and probably WAY MORE ENTERTAINING for you all! Today is my stop on the Moonchild – Voyage of the Lost and Found blog tour. Moonchild is the new book from Aisha Bushby and my lord…

Check out the Q&A with Aisha below and my review – it’s like 2 blog posts in one!!

Moonchild – Voyage of the Lost and Found 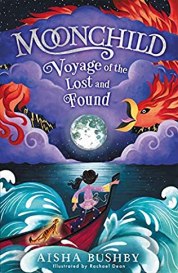 “Twelve year old Amira has only ever known a life at sea with her sea-witch mothers. So when their ship is wrecked in a great storm, Amira is delighted to have an opportunity to explore land – accompanied by her best friend Namur – a jinn in cat form. Amira soon finds a boy who has a jinn like her, and learns that their spirit companions are connected to the mysterious storm that gets stronger each day. When Namur goes missing Amira discovers she has to visit a magical place; a place where lost things can be found. But will Amira also discover her own destiny, and find out what it truly means to be a Moonchild?”

Moonchild sees us going on a journey across the seas with young Amira, a girl who has anger in her veins and a brilliant jinn cat. When she learns that there is more to her story than her mothers are letting on, she makes it her mission to find out the truth for herself. Along the way, she meets some new friends and one very terrifying thing to overcome.

One of the things that I loved the most about this story was the sense of magic. There is such magic in the pages: from the writing, to the illustrations to the story itself, there is so much magic that it oozes from the pages. Aisha has an incredible storytelling voice and the way in which the story is told often left me in awe. I’m a big fan of a beautifully told story and this one does everything I want. We all know around here that I love a magical story… so this was ticking off boxes instantly, but once you get past that, you get so much more.

The characters in this book are just wonderful. From the protagonist herself, Amira, you have a brilliant young girl who is going through a lot and seems to be angry with the world. She doesn’t feel like she quite fits in, she feels different, and she goes through the story developing that sense of self. You have her incredible jinn cat who is so lovely (I love a cat) and I loved the connection these two had with each other. As you go through the story, you meet Leo (I won’t spoil how/who he is) who in many ways is the polar opposite to Amira: she’s all heart, he’s all head. She’s feelings, he’s logic. He’s science, she’s gut instinct. I really loved their friendship and I think it worked really well – they both helped each other on the adventure they had to go on and I think a lot of children will find a lot to like about their friendship and how they interact with each other.

Shout out here to the brilliant inclusion of a 2 mother family and how NORMAL it is. I always appreciate a diverse family background in a story and Amira has 2 mams. It’s not a big deal, it’s just her family and I really REALLY appreciate that. We need more inclusion of different family make ups in kids books, and it was so brilliant to read this without it being a THING.

I could go on and on about how much I loved this book… but I won’t. This book gripped me from the get go with a gorgeous setting, incredible characters and a brilliant plot. I can’t wait for more in this series – I think Amira and Leo are going to be on a total rollercoaster and I am here for the whole thing!

I’m done rabbiting now… check out my Q&A with Aisha! It’s a proper honour to get to ask Aisha about her stories!

Tell us about Moonchild: Voyage of the Lost and Found in no more than 10 words.

MOONCHILD is about an angry girl in an apathetic world.

What inspired you to write this book?

My inspiration comes from lots of different places, and I stitch them together over months (and sometimes years) to create something new.

In 2017 I visited Boscastle in Cornwall for the first time and did a tour all about the local folklore. It was then that I heard about witches with cats on their ships, who used to sail into the port and sell items to local sailors. One such item was a piece of rope tied into knots. It was said that if you unknot rope, it will grant you good weather, but in reality it’s because the cats who lived on their ships could sense weather changes. I’m probably misremembering some of this, but it’s what I took from it.

I found this interesting because Kuwait (which features in A Pocketful of Stars) was originally a trade port. Seafaring has a rich history in the middle east (which is perhaps lesser-known to those who aren’t familiar with it).

Alongside this I’d been trying (and failing) to write a book about emotions as a follow up to A Pocketful of Stars. I wanted to anthropomorphise emotions in a contemporary setting, but it wasn’t really working. Finally, I combined the ideas, using influences from Arabian mythology, and it all started to come together.

If you had to describe each of the characters in a couple of words, what would they be?

What’s the most fun bit of the writing process for you?

When an idea finally starts coming together! There’s so much time before it that feels scary, when you’re not sure if the idea has wings, and lots of messiness after. But the moment you know inside of you an idea has the potential to work, it’s magic.

Do you think Amira would be friends with Safiya?

Amira would like Safiya a lot, and be a little overbearing with her and bossy. Safiya would find their friendship a struggle.

Was there anything from the story that you had to edit out?

Lots! I tend to really over-complicate my plots in early drafts, and I’m much more of a pantser at that stage. I had to change and remove some of the short stories (one of which is currently in book 2 – though we’ll see if it makes the final cut), and rewrite the entire middle and ending.

How was the process of writing your second book different to your first?

It was a lot easier in many ways! I understand story structure a bit better now, so I was able to problem-solve more efficiently. A Pocketful of Stars was difficult to write for a number of reasons, and so this book was a nice follow up.

What’s been the best bit of being an author so far?

Meeting the kids who read my books! I miss school visits a lot at the moment (including yours).

What do you hope people take from your story?

That expressing emotions is a good thing, and it’s better to feel and express than to hold everything inside.

We always love a recommendation here! Is there a book you can recommend for kids and teachers alike?

I am absolutely LOVING My Life As A Cat by Carlie Sorosiak. I think she’s such a talented, clever writer.

A massive huge thank you Egmont for inviting me to be part of the blog tour and for Aisha for taking time to answer my questions! This book is brilliant and you should all go out and get it!

Check out the rest of the blog tour! It’s full of brilliance! 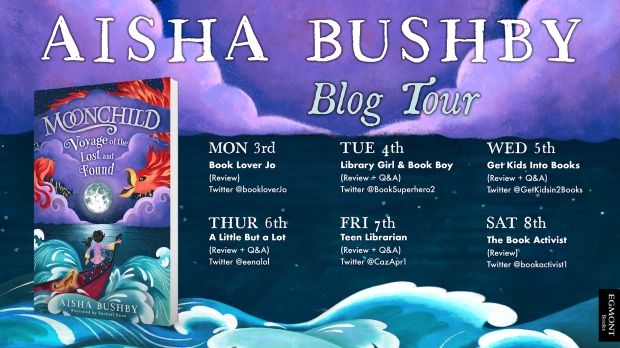