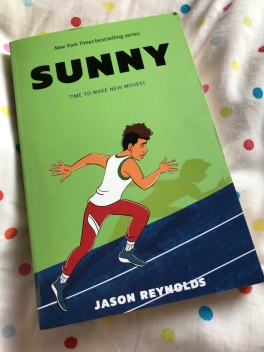 Anyone who’s been here before (or follows me on Twitter) will know that I am a MASSIVE fan of the Run series by Jason Reynolds. I have read both Ghost and Patina (spoiler: I loved them both), so when I saw that it was time for Sunny to be out, I needed to get my hands on it.

This series follows a bunch of 4 runners who are part of the same running team. They’re 4 diverse characters who are dealing with a whole host of different things in their lives and they have running as some kind of escape from their lives.

These books are wonderful books for Year 5s/Year 6s to read when they want something a bit more meaty to deal with. There’s some mature themes dealt with in them, but they’re done brilliantly.

Anyway, let’s get on with talking about Sunny!

“When Sunny stops running in the middle of a race, Coach asks him what he wants to do instead. His answer is dance, but you can’t be on a track team and dance… can you? With his dad’s expectations weighing down on him, Sunny finally finds a track event that feels like dancing. But as he practices for this new event, can he let go of everything that’s been eating him up inside?”

I started reading this book and was instantly met with this wonderful, bright, weird (self-confessed) young man who saw colour and sound in everything in the world. There’s a sound to match everything in Sunny’s world: the way he dances, how people walk, how he runs. He’s writing in his diary because that’s what he does to make the noises stop slightly. His world gets a bit too noisy, and he gets a bit too angry, so he writes in a diary to make these things seem less intimidating.

You meet this young man who is going through it all. He’s learning about himself and that the image his dad has of him isn’t the image he has of himself. He’s not a runner anymore. He’s tired of running. It doesn’t challenge him. He knows he can run and win. So he just stops. Mid race. He loves dancing. It makes sense to him. It makes him happy. He’s scared to share this with the people around him because it’s not what is expected of him, but when he does share it with Coach, Coach does (of course) use it to show Sunny that there is something he can do that isn’t running: discus throwing. As Coach says “it’s basically dancing”.

What you get in this story is an exploration of finding out how to be good at something that you’re not naturally good at. How you can blame yourself for something that isn’t your fault. How family will always be family. How grief can appear in adults. How guilt can drive motives. How there’s always light in the world. How hope can be the thing that keeps us moving.

Sunny is a wonderful main character. He’s so full of pizzazz (is that how you spell that word?!) and he’s so unique. I loved that he was different. He thinks in his own way and reading his diaries was refreshing. It was so lovely to hear his story through his thoughts, through his eyes. His relationship with his dad starts as cold and distant, but as the two grow to learn about each other (with the help of Gramps and Aurelia, who I loved) this begins to change. The last page gave me such feels. There’s some gorgeous moments of gentleness in this story that really punched me in the guts. I think the contrast between his relationship with Coach (who I have adored for 3 books now and I want him to have his own book) and his relationship with dad was interesting. Dad’s arc was gorgeous to read though. Reading adult grieving processes in stories always hits me where it hurts.

I loved that this book explored the importance of Sunny making decisions for himself, not just proceeding with the decisions made by his parents for him. He does things because he’s trying to fill a hole that he thinks he made. He runs because he’s trying to fill a hole in his dad’s life, where his mum should be. When he gets to the point where he realises that’s not who he is, he makes a decision and just stops. Dead in the middle of a race. He’s tired. He’s tired of being what others think.

This is a story full of warmth, love, respect and sadness, but also JAM PACKED with hope. Hope that you can be whoever you want to be. Hope that you can do what makes you happy. Hope that even the hardest of times have an ending. Hope that the people around you will support you, even if you don’t think they will.

I can’t wait for the fourth book in this series to come out (later this year I think), but at the same time, I’m not ready for it to be over. I hope Jason Reynolds writes books for many years to come. And I hope Knights Of keep giving me amazing books to read too!

I love this series so much and getting to know these kids makes me so happy. This deals so gently with grief and how adults deal with it in the background, and in the foreground you’ve got brilliant Sunny who is weird and wonderful and great. He’s a runner, a dancer, a worrier. He’s surrounded by these amazing people and I’m so glad.

Have you read any of the Run series?
Are you following the escapades of Knights Of?
Can you recommend me any books like this?

If you’re not following Knights Of on twitter, please go do that. They are making waves and I just think they’re doing such an amazing job.