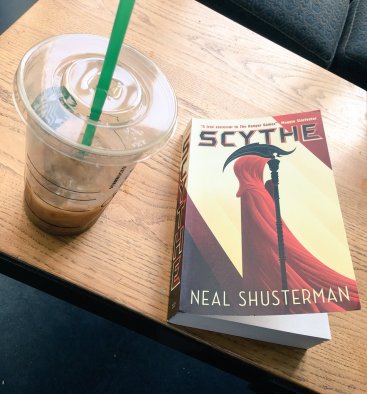 “A world with no hunger, no disease, no war, no misery. Humanity has conquered all those things, and has even conquered death. Now scythes are the only ones who can end life—and they are commanded to do so, in order to keep the size of the population under control. Citra and Rowan are chosen to apprentice to a scythe—a role that neither wants. These teens must master the “art” of taking life, knowing that the consequence of failure could mean losing their own”

I’ve seen Scythe around for MONTHS and it was always something that I was interested by, but just never got round to picking it up. When I finally did get round to buying it and then picking it up, I REGRETTED the time it had taken me to read. I devoured it in a matter of hours.

Scythe is set in a world where there are more people than the world can cope with – there’s a population crisis. There is no disease, no poverty: people are rarely dying from natural causes it seems. In order to combat this, there are people whose job it is to go and kill people. This is where the scythes come in to play – these are the people who are tasked with going out and killing, to try and control the population.

Imagine being a young person in this world, one who really doesn’t want to become a scythe. That’s the position that Rowan and Citra are in. Neither of them wants to become a scythe, but as luck has it… that’s the fate that has become them. They are hired as apprentice scythes to Scythe Faraday – a quiet scythe who has never before taken an apprentice, never mind 2 at the same time (in fact no scythe in history had ever taken 2 apprentices at once). They both hesitatingly take on their positions and, after time, both “warm” to scythedom in their own ways. But obviously, things don’t always go as smoothly as they should… and what ensues is an exploration into a rebellious side of a group of scythes, who have taken the rules into their own hands. A group of scythes who don’t play by the rules.

There’s death plots, mass killings, moral dilemmas, twists and turns aplenty in this book. I wasn’t bored for a second. There’s a BRUTAL scene on a plane, and another in an office block, that genuinenly made me gasp. I was shocked. It’s a very cleverly woven story in which you’re compelled by the scythes and their work. I was fascinated by them and by how they did their jobs. There’s a lot of compassion shown by most of the scythes in the way they undertake their killings. Contrast this with the brutality and sinister motives of the rebellious group and you have a gripping tale.

The characters in this story are truly brilliant. You’ve got the brilliant main characters in Citra and Rowan – I loved their sense of duty and the will they/won’t they in this book. They both show some deceptively clever behaviour that I look forward to reading more in book 2. I’ve gotta give a massive shout out to Scythe Faraday here too – he is one of my favourite things about this book.

As well as the story, you learn about the history of the Scythedom (I think I may have made that word up…) through diary entries from scythes from the past and I loved these. I like learning about the world that I’m reading about without just being dumped with information. You learn a lot about motives, rules, protocol and the duality of a scythe’s thought processes through these diary entries.

I have just bought Thunderhead because I need to read it NOW. (It might actually end up being a half term treat to myself, we’ll see how the reading comes on!)

Let’s talk! I need more people who love this book in my life!