Today I have the absolute joy of hosting Lucy van Smit, author of The Hurting on my blog. I was originally asked to be part of the blog tour with a review, but then I was asked if I’d like to do a Q&A and I was thrilled. I really enjoyed The Hurting… it’s a LOT. My review is coming in the next week or so, so I won’t spoil it too much!

Check out my Q&A with Lucy and go out and buy the book (it’s out now!)… it’s a gripping read!

1) Where did the inspiration for The Hurting come from?
The Hurting started with the abduction of the baby originally as an exercise on my Creative Writing MA to show a character through her actions. I love literary Nordic Noir thrillers, but I don’t like violence, and stealing a baby as I’d lost a child myself, was the worst thing I could imagine. A writing friend scoffed, and told me I’d never get the story published, and that made me stubborn and I found a way into the story that was uplifting – a girl finding redemption after being led astray. I dug deep into myself and explored my Catholic childhood, and Nell calls on almost supernatural mystical powers to try and rescue Ulv Pup. Like Nell, I didn’t believed in romantic love as a girl, but fell in love at first sight with my husband. I really wanted to explore that immense emotion, and wonder what it would it take to fight such an infatuation. It’s a challenging story, and I’m lucky I have wonderful publishers. I was nervous in case adults misread the story, but I just got this terrific feedback from a school librarian

“Dear Lucy,  It’s brilliant! Really, really good – and I’m not just saying that.  I finished it last night and was genuinely sad it had come to an end.  It’s very powerful and so vivid;  some authors are good at characterisation, some at setting…you seem to excel at both.  I’m seriously impressed. I’m thrilled actually, as for me the very best YA books (and the ones that I encourage our Year 8s to read) are those which are well-written, powerful reads on often quite dark subjects but which don’t resort to gratuitous sex or violence.  Personally, I think you’ve nailed it.”

2) Did you always know that Lukas would be as sinister a character as he became?

Hm, Lukas sinister? I don’t see Lukas that way. I perceived Lukas as a very beautiful, damaged, wild, passionate boy raised by wolves, who had vowed to save his wolf pack on the Norwegian fjords. Lukas never intended to fall in love with Nell. She was his prey, but he is hugely romantic. A poetic Lorca character with a dark brooding soul, obsessed with death. Technically, it was extremely tricky to write a thriller in the first person, present tense, so I added a few Lukas scenes in his point of view, to rack up the tension and suspense and explain Lukas’s actions are driven by love to save his family.

3) What did you want a reader to take away from this story?

It’s a Sleeping Beauty fable; at the beginning of the novel, Nell says, ‘I’ve thrown away my life like toilet paper, and never noticed.’ She is woken by a kiss, but finds herself through her connection with the baby Ulv Pup who represents Nell’s innocence and pulls Nell back to her true self. I wanted a reader to notice themselves more, their own lives more and how much is wonderful in ourselves and our immediate families.

4) Your setting is one of the most beautiful I’ve ever read, did you visit any exotic locations for the story?

Wow!  Thank you so much. I am a painter and used to work in TV. I guess I am a visual writer.  I took my family on a trip to Norway and we visited the Norwegian Fjords, the famous Flam Railway and Bergen and Oslo, and the Pulpit Stone in Stavanger down south, which I ‘moved’ in my story and called Sermon Rock.  I chose Norway because I needed wolves because of Nell’s fear of dogs, but I fell in love with the fjords. It is the most beautiful county. On the trip, we stayed with farmers who had a local wolf problem, where a lone wolf was behaving out of character and killing dogs in the woods and attacking goats in front of people. Norwegians kill a lot of wolves and an alpha left isolated without a pack becomes unpredictable and aggressive. I picked up loads of lore about Norway along the way.

5. There’s a lot of twists and turns in the book, are you a plotter or do you let your plot take you by surprise when you write?

Definitely a plotter when it comes to a thriller. I use a lot of TV tricks, sets up and pay offs. I’d see an image or a clue earlier on, so when the twist comes it feels more plausible. For the more lyrical sections, where Nell tunes into her singing and her response to the landscape and her feelings for the baby, that often sprang out and surprised me.

A massive thank you to Lucy for taking the time to answer my questions! It’s always fascinating learning all about books from the author themselves!

Check out the rest of the people on the blog tour… there’s some cracking posts! 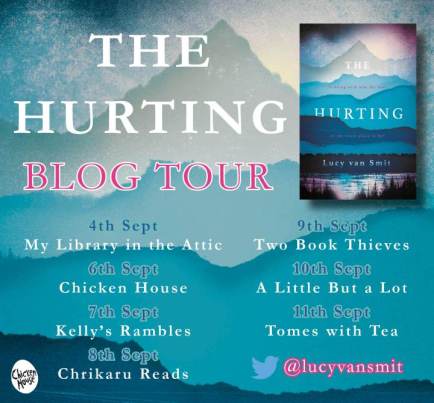 4 thoughts on “BLOG TOUR: The Hurting”