Hello, I’m Steph and I finished reading Crooked Kingdom about 2 weeks ago. I’m STILL NOT OVER THESE BOOKS. I know. I know. The fact I’ve only just read them and it’s taken me so long to get this review up. I am the most terrible bookish human ever… BUT I HAVE SUCH FEELINGS NOW. SOMEONE SEND SOMEONE TO SAVE MY SOUL (preferable Kaz, although, maybe not… I don’t think I could cope being around that man. He’s too clever for me, but we’ll get to him in a minute!)

So… for those who, like me, have not read Six of Crows or Crooked Kingdom… 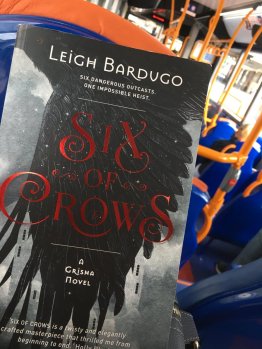 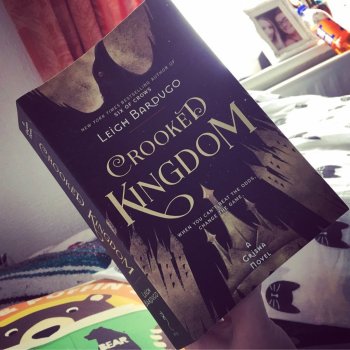 “Ketterdam: a bustling hub of international trade where anything can be had for the right price–and no one knows that better than criminal prodigy Kaz Brekker. Kaz is offered a chance at a deadly heist that could make him rich beyond his wildest dreams. But he can’t pull it off alone…
A convict with a thirst for revenge. A sharpshooter who can’t walk away from a wager.
A runaway with a privileged past. A spy known as the Wraith. A Heartrender using her magic to survive the slums. A thief with a gift for unlikely escapes.
Six dangerous outcasts. One impossible heist. Kaz’s crew is the only thing that might stand between the world and destruction—if they don’t kill each other first.”

Basically… these two books are PERFECTION. I can’t put into words right now just HOW BRILLIANT THEY ARE. There’s so much I love about this duology: the characters, the plot, the writing, the world building, the sarcasm, the darkness, the cleverness of it all.

So Six of Crows is the plan for the heist and Crooked Kingdom is the aftermath of the heist.

Who better to go and steal something that could change the course of the world than members of one of the local gangs? Obviously.

Now I can’t talk about these books too much without giving away the plot for one (Or the other), but I will tell you this… once you start you won’t want to stop. I was lucky in that I owned both Six of Crows and Crooked Kingdom, so when I finished Six of Crows I could INSTANTLY move on to Crooked Kingdom. Had I not have owned it, I would’ve gone straight out to a bookshop and book Crooked Kingdom. The bombshell at the end of Six of Crows is THAT GOOD that you will NEED Crooked Kingdom in your life instantaneously.

(For those of you wondering, you don’t need to have read the Grisha trilogy to understand and adore this duology. You will love it anyway. The first chapter will confuse you a little, but bear with it! I’m looking forward to reading the Grisha trilogy now though… A LOT. However, I feel nothing will quite live up to the love I have for Mr. Brekker and his crew of merry thieves).

These books are so clever and Leigh Bardugo is quite clearly a genius. There is no doubt in my mind about that.

You will 100% fall for the characters in this story. 100%. No doubt whatsoever. If you don’t love them then I will eat my hat (I don’t wear hats, sorry chaps, I’ll eat a packet of crisps or something…)

I need to take a moment to appreciate and share my love for Kaz Brekker – the leader of the gang. He’s clever, wily, suspicious, witty, brilliant. I just adore him. The way he adores one of the other characters is just incredible. His progress from the start of Crows to the end of Kingdom just made me delighted. He’s a special kind of character who comes along every now and again. Just takes your heart away with him. I miss him entirely.

The rest of his gang have a MASSIVE place in my heart. It’s hard not to love this bunch of “losers”. They all have incredible back stories that you learn as you go through the books (this I adored, I love a bit of backstory!). There were MANY MANY times I feared for my pals’ lives. Many times where I was worried that they would not come out alive, but obviously, I do not know that well. There is always a plan. Brekker is a man with a plan.

Guys. I just loved this book, OK? I’m sorry this review is just a ramble. There is too much to say and I have far too few words to be able to say them in. The world, the characters, the plot, the duality of lives, the magic, brutality, friendships, romance, terror, worry, laughter.. it’s everything that I need in my books.

I mean… go check out other reviews. They’re probably far less rambling and less fangirling than mine.

Have you read Six of Crows?
Will you be signing your life over to the Dregs and Brekker?
WHY HAVE YOU NOT READ IT YET PLZ?

OK, I’m going to lie down because it’s taken me so long to write this “review” that my brain has stopped. Talk to me, PLEASE, about these books and these characters. Let’s all join together and make Leigh Bardugo write us more Kaz and Dregs books.