It Only Happens In The Movies: heart-breaking and moving. 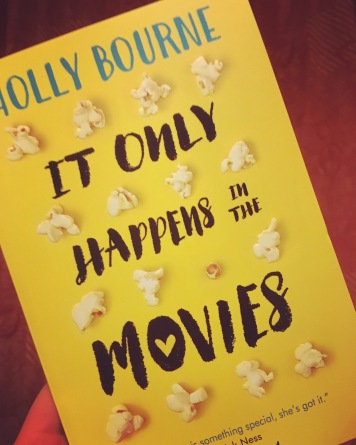 “Audrey is over romance. Since her parents’ relationship imploded her mother’s been catatonic, so she takes a cinema job to get out of the house. But there she meets wannabe film-maker Harry. Nobody expects Audrey and Harry to fall in love as hard and fast as they do. But that doesn’t mean things are easy. Because real love isn’t like the movies…

The greatest love story ever told doesn’t feature kissing in the snow or racing to airports. It features pain and confusion and hope and wonder and a ban on cheesy clichés. Oh, and zombies… YA star Holly Bourne tackles real love in this hugely funny and poignant novel”

When I heard that Holly Bourne was writing a new book, I knew I needed it straight away. When I heard Holly Bourne was going to be doing an event in Newcastle (which I sneakily found out at YALC, a few weeks before it was announced!) I knew I needed to be at it, regardless. It isn’t often that events come to Newcastle, so I was THERE. If you’re interested in my blog post about the event, you’ll find it here: Events!

But onto the book. The main event. I managed to NOT buy the book before the event, despite everyone shouting about it, I was good and MY GOSH was it worth the wait. It is just incredible. It broke my heart in so many places, that even now a few weeks later I am still putting my heart back together. In ‘Movies’ (let’s call it Movies, cause it’s much shorter), you meet Audrey: a teenager, trying to get through life, despite everything falling apart around her. Her mam is struggling a lot with the separation from her husband; Audrey gets a new job (where yes, of course, there is a handsome young man for her to fall for) and she’s trying to deal with the stress of exams and the future. She split up with her ex and there’s reminders of him everywhere, she gave up things when they split up that she regrets. She’s just trying to keep everything together, when it just seems to be falling apart.

She gets a job at a cinema and things in her life outside of home perk up from there. She gets to meet some amazing friends. Does a bit of acting. Learns how to make guacamole. Confronts some sexism. Kisses a boy. Pulls apart some romantic comedies. Fights against stereotypes (there is an amazing monologue from Audrey in the sampler that I needed the book for). While all these things seem to be going well, her mam is falling apart. Her mam is REALLY struggling. She’s not coping, at all. She seems to have good days. She has really bad days. Audrey needs to often balance looking after herself, with looking after her mum.

I just have so many feelings about this book that I will never get them down in a way that does this book justice. Audrey is brave and bold. She’s brilliant. Keeping herself together while everything with her mam is falling apart must be the hardest thing ever. My heart broke for mam. My heart broke for Audrey. I cried for a good 20 minutes after finishing this book. WHAT DID YOU DO TO ME BOURNE?!

The thing that stands out for me about this book is that it deals with very real problems, without shying away from them. Mam’s struggles. Audrey’s worries about her past relationship. The relationship between Audrey and her mam. Audrey’s brother. The feminism shouting. I just adored it.

Go on. Read this. You won’t be disappointed.

Have you read It Only Happens In The Movies?
Do you have any favourite romantic films?

I am a fan of a romantic film, so go on, shout some at me. I (totally don’t) need more in my life. Leave me a comment, or catch me on twitter (@eenalol)