The Loneliest Girl in the Universe: a gripping, unique heart-racer 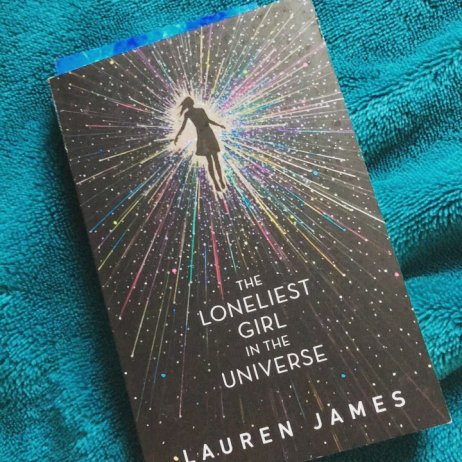 “Can you fall in love with someone you’ve never met, never even spoken to – someone who is light years away?
Romy Silvers is the only surviving crew-member of a spaceship travelling to a new planet, on a mission to establish a second home for humanity amongst the stars. Alone in space, she is the loneliest girl in the universe until she hears about a new ship which has launched from Earth – with a single passenger on board. A boy called J. Their only communication with each other is via email – and due to the distance between them, their messages take months to transmit across space. And yet Romy finds herself falling in love. But what does Romy really know about J? And what do the mysterious messages which have started arriving from Earth really mean? Sometimes, there’s something worse than being alone . . .”

The Loneliest Girl in the Universe (I’m going to call it Loneliest Girl in this blog, because well it’s a LONG title!) tells the story of Romy, who is the captain of a ship on its way to a new planet, with hopes to make it hospitable. She’s all alone on this rocket, with only audio/email messages coming from her therapist Molly. Something changes and suddenly there’s a mysterious stranger on the scene. This stranger is J, the captain of another ship, and Romy quickly finds herself falling for this mysterious stranger. When things start becoming a bit suspect, Romy discovers that J isn’t quite who he says he is…

I had seen SO MUCH about this book on twitter! Everyone was talking about it. I was SO ENVIOUS of all of the people who had advance copies. I needed to get my hands on it. I was elated when I heard they would be selling them at YALC. When it came to YALC, Kelly and I rushed to buy a copy (because we were afraid they’d run out of copies!) just to be sure we would get one. It has sat on my shelf since YALC but I was determined to read it before we did a SundayYA chat about it. AND READ IT BEFORE SUNDAYYA I DID. It took me all of about 4 hours to read. It is THAT GOOD. It’s so readable. Gripping. The kind of book that takes you by surprise (it certainly took me by surprise!)

This book is very character centric and luckily for me, I loved the characters. Romy (the main character) and her story were very well written. The flashbacks of her memories growing up, her memories of the rocket were gorgeous to see. Her parents are very important to her – both in very different ways – I loved her relationship with her dad. Her relationship with her mam kept me very curious. The other character in the space world in Loneliest Girl is J: mysterious, handsome, seemingly perfect. Romy definitely falls for him fast. Her trust of him pulled the wool over my eyes. I didn’t like him from the start… there was something about him I didn’t trust. He was too convenient. He was the perfect, most sinister, creepy baddie though. He adds a brilliantly sinister dynamic to this book. Definitely kept me on my toes.

I would recommend this book to EVERYONE. It is one of those that would appeal to SO MANY PEOPLE. It’s so clever and devious and delicious. I’m curious about the rest of the author’s work now… if they’re all this good I need to get them NOW (well, when September is over cause y’know book buying ban and all that!)

Have you read Loneliest Girl?
What did you make of J?
Do you think you’d cope with Romy’s life?

Let me know in the comments or on twitter! I’d love to talk about this book!