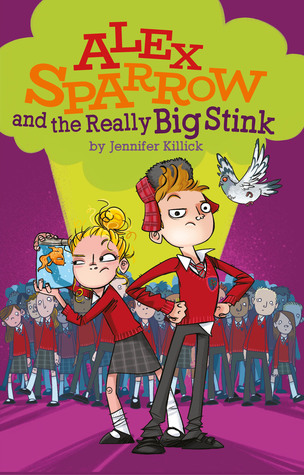 “Alex Sparrow is a super-agent in training. He is also a human lie-detector. Working with Jess, who can communicate with animals, they must find out why their friends – and enemies – are all changing into polite and well behaved pupils. And exactly who is behind it all.
Alex Sparrow and the Really Big Stink is a funny, mid-grade novel full of farts, jokes and superhero references. Oh, and a rather clever goldfish called Bob. In a world where kids’ flaws and peculiarities are being erased out of existence, Alex and Jess must rely on what makes them different to save the day”

Alex Sparrow and the Really Big Stink tells the story of Alex and his rabble of weird friends who all have some kind of power, who are trying to save the kids in their school. There’s funny goings on in Alex’s school… all of the children are becoming clones of a very mellow and well behaved model. They’re all being brainwashed by a programme ran by one of the teachers at his school and it’s up to Alex, his pet goldfish Bob, a pigeon and his friend Jess to get to the bottom of this weird behaviour.

Alex has a very unusual super power… whenever he is near someone who is telling lies his ear lets off a big fart (sometimes very smelly ones!). This proves to be a handy, if unusual, power for Alex to use in order to get his school back to normal!

Filled with fart jokes, smells and secret super-agent happenings this is a sure fire winner for kids. It’s going down very well at school! The kids think it is hilarious (even as an adult, I had a fair few giggles!) and it’s been passed round quite a bit!

Thank you to Jennifer for sending me a copy to share with my kids! Can’t wait for the second installment!

Have you read Alex Sparrow?
What would you want your weird superpower to be?
What do you think is next for Alex Sparrow and Jess?

Let me know on twitter or in the comments! I would love to hear from you!