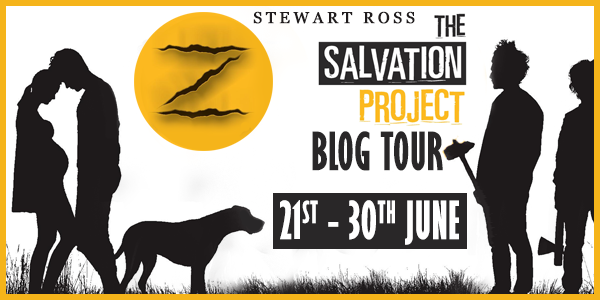 “A mutation in human DNA means no one lives beyond nineteen. Scientists working to reverse the disease died before their Salvation Project was complete, and they left the results of their research – the Soterion – in a sealed vault. 122 years have passed. The civilisation of the Long Dead is almost forgotten, the Soterion has been burned to ashes, and communities of Constants are tormented by tribes of brutal Zeds. Cyrus, his pregnant copemate Miouda, and his young friend Sammy have escaped from the burning city of Alba. They have rescued a laptop containing the entire contents of the Soterion, including the Salvation Project. On this frail and ancient machine hangs the last and only hope of restoring the civilization of the Long Dead. But the laptop’s batteries are flat, there is no electricity to power it, and it is only a matter of time before the thwarted Zeds set off in pursuit…“

A great new dystopian novel, ending the trilogy with a bang!

These books are full of twists and turns, with plot twists you don’t expect alongside characters who will surprise you along the way. It’s hard not to be surprised by a plot centred around science, challenges and tough choices. There’s times when, as a reader, I thought ‘I don’t want to make that choice’ but the characters have to. It’s their destiny. You want them to reach their destiny however hard or easy that is. Imagine not living past 19 – I would’ve been dead a long time ago, but that is the reality of these characters. The characters, with their bizarre and unusual names, will however worm their way into your heart and take seat there. You’ll feel for them, you’ll want to cheer them on, they’re characters you will learn to love. The ending is great – I didn’t see it coming, it moved me (I mean I cry at EVERYTHING so no one is surprised there!)

If this sounds like your bag of crisps, then go on, treat yourself. Dystopian fiction is one of those I dip into every now and again because I remember how much I love it while I’m there! Stewart Ross has written a great series. Teenagers will love it! It has good pace, enough drama and action to keep you interested!

Stewart was born in Buckinghamshire and educated in Oxford, Berkhamsted, Exeter, Bristol, and Orlando, Florida. He taught at a variety of institutions in Sri Lanka, the Middle East, the USA, and Britain before becoming a full-time writer in 1989. With over 300 published titles to his credit, he is now one of Britain’s most popular and versatile authors. His output includes prize-winning books for younger readers, novels, plays, three librettos, a musical, and many widely acclaimed works on history and sport. Several of his books are illustrated with his own photographs.Stewart also lectures in France and the UK, gives talks, runs workshops, and visits schools. He is an occasional journalist and broadcaster. His brother, Charlie Ross, is the celebrated auctioneer. In his spare time Stewart enjoys travel, restaurants, sport, theatre, photography, art and music. He lives near Canterbury with his wife Lucy, and – occasionally – his four children and two grandchildren. Each morning he commutes 10 metres to work in a large hut in the garden.

Thank you so much Faye for inviting me to be part of the blog tour! If you’re interested in the other stops on the blog tour, check out the blogs featured below! There’s lots of fun things going on on the tour!