The Vanishing Trick: deliciously evil and filled with magic! 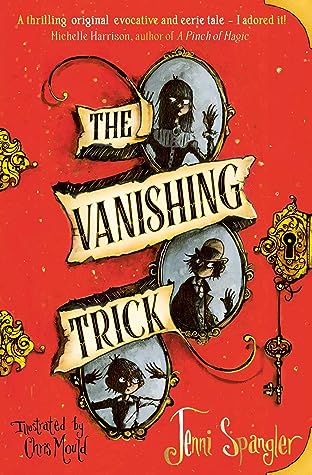 “Madame Augustina Pinchbeck, travels the country conjuring the spirits of dearly departed loved ones… for a price. Whilst her ability to contact ghosts is a game of smoke and mirrors, there is real magic behind her tricks too – if you know where to look. Through a magical trade, she persuades children to part with precious objects, promising to use her powers to help them. But Pinchbeck is a deceiver, instead turning their items into enchanted Cabinets that bind the children to her and into which she can vanish and summon them at will. When Pinchbeck captures orphan Leander, events are set into motion that see him and his new friends Charlotte and Felix, in a race against time to break Pinchbeck’s spell, before one of them vanishes forever…”

I received a proof of this brilliant book from the publishers over at Simon and Schuster and it was one of those books that just kept whispering at me until it was irresistible and I had to pick it up!

The Vanishing Trick tells the story of Leander, a young boy who has lost a lot of things in his life and he just wants to be found. In his little town, a mysterious woman appears in her carriage and promises Leander a life of luxury. Initially, Leander is scared off by a strange girl in Pinchbeck’s carriage, but the pull of a life of being looked after and fed is too much for Leander. When he accepts Madame Pinchbeck’s offer, he has to surrender the one thing that he cherishes most: a locket from his mother. What happens when he hands over the locket to Madame Pinchbeck changes the course of his life forever.

One of the things I loved most about this book was the constant sense of eerieness and danger. There’s a perpetual sense of scariness. It’s just enough to have you looking over your shoulder, but not too much that it’s going to terrify children out of their wits. This isn’t a scary book: it’s more foreboding and filled with that sense of ‘AHHHH’. You don’t know what’s going to happen next.

I loved the concept of the Cabinets. The precious object that the children hand over to Madame Pinchbeck in return for her looking after them. The idea that she has the power over them to turn you into a spirit which is compelled to get into the cabinet at her command. It’s a wonderfully fascinating thing and I loved reading it!

I’ll tell you… the threat of disappearing forever was certainly something that I would not want to happen to me!

The characters in this story are wonderful. You’ve got a great mix of personalities in the children. Leander is our hopeful orphan who just wants a family. He just wants friends. He wants to feel like he belongs somewhere after not belonging anywhere for so long. In Pinchbeck’s custody (is that a word I would use?), you also have Felix. He’s like the brilliant little brother and he’s a bit scared, but a bit brave. Then you have Charlotte. She’s protective, a bit brash and bold, but she’s got a wonderful heart underneath it all. I loved seeing the relationship between the children grow and develop. You really see them go from being almost ‘aliens’ to each other to being like a real family.

Madame Pinchbeck is one of those gorgeously evil villains you get every now and again in children’s books. She’s like the Mrs. Trunchbull of this world. She doesn’t really like kids, but they’re a necessary evil in her life. She gets more from them than they get from her. She’s deceptive and dastardly. There’s a wicked sense of sinister-ness (that’s not a word!) about her. You know there’s something you shouldn’t trust about her… but you’re never sure whether you should trust her or not. You’re lured every now and again into thinking she’s actually doing the right thing… but she’s not.

I’d love a story about Madame Pinchbeck’s past. She’s one of those antagonists I’d love to learn more about.

This book gave me everything I wanted: magic, friendship, a sense of danger, family. This has gone down well with so many of my kids and I think it’s going to be one that kids and adults alike just adore.

A massive shout out here to Chris Mould’s illustrations. I think he’s an incredibly talented illustrator and his illustrations add so much to this story. The sense of danger in this story paired with Chris’ signature illustrative style are just a match made in heaven. It was so nice to be introduced to the characters after just picturing them in my head!

A massive thank you to Simon and Schuster for sending me a proof copy of this book! It’s out now! Go support your local indies and get a copy! It is JUST WONDERFUL.

Have you read The Vanishing Trick?
What do you think your Cabinet would be?
Which villainous character would you like to know more about?

Talk to me in the comments, or on twitter! I’d love to know your thoughts!