This afternoon I have the absolute joy of hosting Patrick Skipworth to kick off the blog tour for his brand new book Literally which is an incredible non-fiction all about the origins of words.

“Did you know that English words come from all over the world? And often their meanings have changed over time? Find out about the journeys of a selection of words from the English Language in this amazing visual resource. Each word is paired with a two-page spread illustration, which takes inspiration from the origins of the word itself.”

In the guest posts on the LITERALLY Blog tour I’ll be taking a closer look at three familiar areas of English vocabulary to reveal some of the surprises hidden in our words.

Do you have a child who wishes they were an animal? Maybe they want to toot like an elephant, howl like a wolf or roar like a lion. All of these verbs have onomatopoeic origins – they’re based on our attempts to recreate a sound in nature that we’re not really equipped to make. We don’t have a trunk like an elephant so we have to make do. The rather ridiculous sounding word onomatopoeia comes from ancient Greek and, when you break it down, means something like ‘name-maker’. On the surface, onomatopoeias might just seem like a fun way to impersonate your favourite animal or, if you want to push it a bit further, to whistle like the wind or crash like a wave. But linguistics can give us a deeper perspective on these fascinating words. In fact, some linguists think that onomatopoeia may be one of the most powerful forces in creating words, and humans howling, roaring and whistling could be fundamental to the origin of language. Imagine a world without any words. How do you go about the difficult task of coming up with names for things? One way is to imitate the world around us – onomatopoeia gives us a way of escaping the arbitrary nature of choosing sounds to signify objects and ideas. If you hear a wolf howling and copy its sound, before long you’re building a vocabulary built around onomatopoeia. Some of these words come to mean things associated with the sound, such as owl, which ultimately arises from the ‘uwwah’ sound these birds make. These words can then develop and combine in new ways until their onomatopoeic origins become obscure, but onomatopoeia remains one of the most fundamental and powerful ‘name-makers’.

The funny thing about onomatopoeias is that they show us that we don’t all see and hear the world in the same way. You might think that there’s a predictable way to label things – after all we’re copying how the world really sounds. But that’s not the case when we take a look at other languages. In Japanese, a dog doesn’t woof but goes wan (although cows do moo). In Turkish, insects don’t bzzz around your picnic, but vzzz. Why the change? Aren’t all the sounds these animals make the same? Does a bee buzz in the woods if nobody’s listening? Of course! One reason for the difference is that speakers of different languages prefer some sounds over others. This mostly depends on the languages we learn growing up. It’s the same reason that it takes a bit of practice for an English speaker to start pronouncing their Goudas and van Goghs like a Dutch speaker (the ‘g’ sound is somewhere in between our hard ‘g’ and a raspy ‘hhh’ sound).

Another reason is that we aren’t really picking these sounds up directly from nature. We learn vocabulary with onomatopoeic roots from other humans. Here’s an example: have you ever heard a frog ribbit? Unless you live in or around California, the answer is probably no. So when did frogs start to talk this way. The answer might have a lot to do with Hollywood! There’s a particular type of frog in California that ‘ribbits’ and Hollywood decided to record them for movies. Before then, frogs just croaked. Hollywood got us speaking a whole new language of frog. Onomatopoeias are great at showing us how humans think creatively about their world, and how we share that information between languages and across the globe.

LITERALLY: Amazing words and Where They Come From by Patrick Skipworth, illustrated by Nicholas Stevenson (£11.99, What on Earth Books) 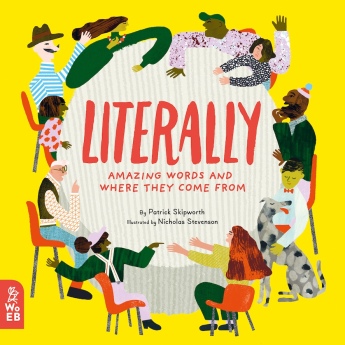 A massive thank you to Patrick for letting us in on his language safari! I can’t wait to check out the rest of the posts on the blog tour to find out more about the origins of some words (I’m a PROPER lover of stuff like this!). Come back next week too for my review of this amazing book! Check out the rest of the stops on the blog tour in the coming days!