How are you all this fine Monday? What have you been reading lately?

Today I’m here to share an exciting stop on the Sanctuary blog tour. To celerate the paperback release, I was invited to be on the blog tour and I had the ABSOLUTE joy of asking author V. V. James some questions! 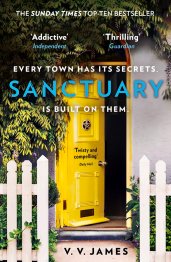 “The small Connecticut town of Sanctuary is rocked by the death of its star quarterback. Daniel’s death looked like an accident, but everyone knows his ex-girlfriend Harper is the daughter of a witch – and she was there when he died. Then the rumours start. When Harper insists Dan was guilty of a terrible act, the town turns on her. So was his death an accident, revenge – or something even darker? As accusations fly and secrets are revealed, paranoia grips the town, culminating in a trial that the whole world is watching…”

Which character did you have the most fun writing?

If I’m honest, Detective Maggie’s sweary boss Remy. It’s always fun to write a character who’s unafraid to let rip a little! Which character did I most enjoy spending time with? Maggie herself. She’s honest, compassionate and astute, but really positive to be around as her brain races a mile a minute to work out what’s the right thing to do. And there’s something about Harper Fenn that satisfies my soul. The exchange toward the end between Harper and Abigail is probably my favourite moment in the book.

The setting of the story came out of a moment in time, and multiple locations. The moment, we all know – the Women’s Marches and the #MeToo movement. Finding the right location was an interesting process. It always had to be New England, centre of America’s original witch persecutions. It’s also a part of the US I know well, and which historically was significantly shaped by British and Irish settlement. That way I could draw on British heritage when depicting the magical traditions of the Fenn family, staying close to what I know and feel able to write about. I visited Salem while writing, but knew I didn’t want to set it in Salem itself – that would be a bit too ‘on the nose’! So Sanctuary is a mix of several places – mostly a posh historic New England seaside town where I did a two-week writing retreat, but also Greenwich CT … which I later discovered was the setting for THE STEPFORD WIVES!

Did you always know the story was going to go the way it did, or did any of it surprise you?

SANCTUARY has so many twists and turns it had to be very tightly plotted in advance, batted back and forth between me and Gollancz’s editor extraordinaire, Rachel Winterbottom! But characters do surprise you – Harper was particularly insistent on this. And some characters who were never in the outline walked onto the page at the right moment, totally confident in their place there – specifically Maggie’s colleagues, Remy, Rowan, and Chester. Even a cop as dedicated as Mags needs some help unravelling a case like SANCTUARY’s!

Will there be any more from this bunch of characters?

SANCTUARY was always conceived as a standalone, and it definitely reads as a complete story – there’s no cliffhanger. But as a writer you get so attached! So I do have a book two plotted out, which picks up a few months after the events of this book, and the essence of a third! Whether they get written depends on how well this book does, and also whether the super-exciting progress of a screen adaptation moves forward to a greenlight. So who knows, but I would love to be able to tell you what happens next!

(READER, I AM EXCITED)

Can you tell us anything about what you’re writing now?

Two historical novels! But they share a lot of DNA with my books to date: a big cast, lots of plotty action, and a fondness for decent people trying to navigate a morally complex world (along with more than a few morally complex individuals!)

What have you read recently that you’d recommend?

I’m finding reading hard right now, amid the nonstop stream of Covid-19 news. I’m trying to wean myself off the news updates. Recent reads guaranteed to suck you in are: Mel Salisbury’s just-released HOLD BACK THE TIDE, a heart-piercing historical … horror, I guess? I was bewitched. I’ll never stop recommending Sam Shannon’s chonky and magnificent PRIORY OF THE ORANGE TREE. GIDEON THE NINTH was wild and I can’t wait for the sequel. I know I’m soooo late to this one, but I just gulped down the NEVERNIGHT trilogy – or did it devour me? Honestly amazing! Or for something completely different to fantastical fiction, try brutal-but-lyrical real life. Saeed Jones’s HOW WE FIGHT FOR OUR LIVES and Carmen Maria Machado’s IN THE DREAM HOUSE are two searingly intense queer memoirs of identity, abuse, and resilience, powerful

(As you can tell, Vic and I are kindred spirits… Melinda Salibsury recommendation? YES PLEASE. YOU ARE WELCOME BACK AGAIN!)

Why not check out the rest of the stops on the blog tour while you’re here, or when you have 5 minutes? You’re in for a load of treats! 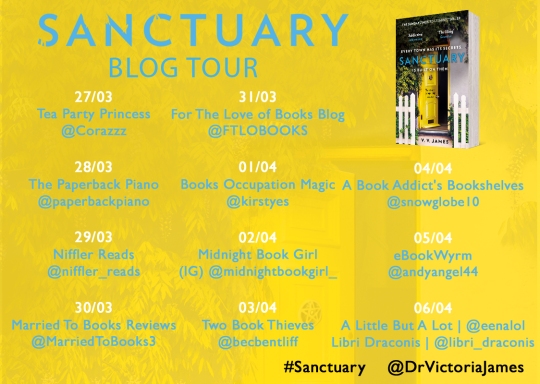 A massive thank you to the publishers for asking me to be part of this blog tour and to Vic for taking the time to ask my questions!