Sofa Surfer: a gorgeous story with helping people at its heart 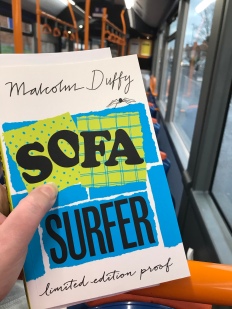 (this was me devouring the proof on the bus, obv)

“15-year-old Tyler’s teenage angst turns to outright rebellion when his family leave London for a new life in Yorkshire. He’s angry with his parents about the upheaval and furious at losing his home. With only the dog to confide in, Tyler has no idea that a chance meeting with a skinny girl called Spider will lead him into a world he never even knew existed. Spider is sofa surfing and Tyler finds himself spinning a tangled web of lies in his efforts to help her escape her world of fear and insecurity.”

Now, it is well documented that I was a MASSIVE fan of Malcolm’s first book ‘Me. Mam. Me Dad. Me’ (if you’ve not read it please go and do that because it is bloody magnificent) which came out last year, so when I was asked if I wanted to be part of the blog tour for his second book, I jumped at the chance. I knew that if his first book was anything to go off, this book was going to be a proper hit… and let me tell you, it did not disappoint at all!

Sofa Surfer tells the story of lovely Tyler, a young lad whose life has been turned upside down by a move away from London to Yorkshire. He hates it. He’s angry with his mam and dad cause they’ve pulled him away from everything he loves: his friends, his hobbies, his school. Now he’s somewhere new with no-one and nothing to do apart from walk his adorable dog. Through the story, Tyler grows to like the place he lives in. He finds friends in unexpected places and learns that lies, even when they’re there to try and help, are not a great thing.

I loved reading this book. The characters in particular have a proper big place in my heart. Besides the fact that one of them is a Geordie (yes, we all know I STAN a Geordie character, it makes me feel at home in a book), they’re so brilliant written, they’re fully formed and they’re flawed.

If we start with Tyler, here you have a young man who is so gorgeously kind hearted, naive at times and so keen to help. He starts the book understandably angry and a little bit distant, but as you go through the book you learn more about him and see that he is someone who just wants to help. He makes mistakes; he says things that he shouldn’t; he chooses to do things that are questionable, but ultimately he’s human. We’ve all done it. We’ve all made mistakes in life that we have to learn from. He tries his very hardest to fix the things he’s done wrong.

Tyler of course is only trying to help Spider. Lovely, lovely Spider. Spider, who we initially meet who seems quite cool and put together, whose story we learn as we go through the story. A character who teaches us about some of the realities of being homeless. A character who teaches us about the importance of listening. A character who is trying her best to do the best for herself. A character who wants so much but asks for so little. She gets woven into this story in such a gorgeous way. I fell for her straight away (being Geordie aside) because she oozes a kind of confidence. As you go through you see that a lot of it is a facade (as a lot of confidence can be!) and she’s just trying to put on a face.

I think this story is one that has the potential to open a lot of conversations. It’s one I think a lot of people are going to love. It’s a story about friendship and standing up for what you think is right. It’s a story about two teenagers who have very different lives, who are brought together for a reason. It’s one of those books that sticks with you. I just adored it.

Don’t forget to check out the rest of the blog tour!