Simon vs the Homo-Sapiens Agenda: possibly the cutest ship I’ve ever shipped. 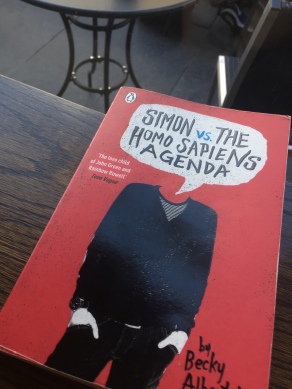 “Sixteen-year-old and not-so-openly gay Simon Spier prefers to save his drama for the school musical. But when an email falls into the wrong hands, his secret is at risk of being thrust into the spotlight. Now Simon is actually being blackmailed: if he doesn’t play wingman for class clown Martin, his sexual identity will become everyone’s business. Worse, the privacy of Blue, the pen name of the boy he’s been emailing, will be compromised. With some messy dynamics emerging in his once tight-knit group of friends, and his email correspondence with Blue growing more flirtatious every day, Simon’s junior year has suddenly gotten all kinds of complicated. Now, change-averse Simon has to find a way to step out of his comfort zone before he’s pushed out—without alienating his friends, compromising himself, or fumbling a shot at happiness with the most confusing, adorable guy he’s never met.”

(I didn’t need to give you all the blurb. I think I might be the last person on planet Earth to read this, but hey ho. Here we go!)

A while back, I got the chance to see Love Simon (the movie adaptation of this book) and I absolutely adored it. It’s just the sweetest thing, so when my friend Aoife said she wanted to make Simon vs the Homo-Sapiens Agenda our “travelling book”, I was delighted. I’d avoided picking Simon up for SO LONG (I’m not quite sure why, but I think my angst around hyped books played a part!) but now I had a real reason to WANT to read it and to have to read it too… and my god, I just loved it.

I would’ve been more than happy if this book had just been a book filled with Blue/Simon emails to be honest. Because I am a TRUE SHIPPER. I love a bit of romance. Romance, especially this kind of romance, is something I can TRULY get behind. I loved the emails so much. I looked forward to the email chapters massively. The progression of emails from quite proper, advice emails, to sheer and unashamedly flirting emails was something I could get behind entirely. The emails made me laugh and cry in equal amounts. (I have to say the fact I knew who Blue was didn’t spoil it too much… but I wish I’d read the book before seeing the film!)

Moving on from something I loved about the book, to something (or rather someone) that I wasn’t too keen on. Oh, Leah. (Now I’ve not read Leah on the Offbeat yet, so I could eat my words when I do read it) Part of me can see the beef Leah has with Simon, but part of me (a larger part of me) just found her a bit unbearable. I felt like she wanted to make the WHOLE situation about her and that didn’t sit well with me.

On the other side of the coin, I ADORED Abby. SO MUCH. She’s a brilliant egg.

Martin, for me, is possibly one of the most problematic characters in YA. I just can’t stand the dude. Nothing about him makes him a redeemable character. Straight up blackmailing someone is not OK. Ugh.

But back to the lovely things – the support Simon receives from the people around him when he does come out made me SO happy. Not only from his parents (although that’s a touchy subject, drunk Simon isn’t a great role model on how to speak to your parents!), his sisters, but his teacher too. I will stand on my pedestal of WE NEED POSITIVE TEACHERS IN BOOKS forever and this book is a shining example of that.

(There’s a scene with an Elliott Smith t-shirt and a note that made me weep – tbf I wept a lot!)

The film is quite different to the book, but I guess that’s necessary because of the constraints of film. You get the same warm, fuzzy feeling from the book and film. I would recommend both whole heartedly. If you’re looking for something that will make you happy, I’d go with this – just focus on Blue and Simon.

Have you read Simon vs?
What do you think of Leah?
Is LEah on the Offbeat worth reading? Will she redeem herself?
DO YOU SHIP BLUE AND SIMON WITH ALL YOUR HEART TOO?

Let me know in the comments, or on twitter. I have a lot of feelings about this book!