Today I have the sheer joy of being part of the blog tour for Theatrical, the newest book from the wonderful Maggie Harcourt. Today’s blog post is not only a review but I get to share a little bit of my love for theatre too… what a joyous thing to read on a Monday morning!

Theatrical: a book to make you smile and show the magic of theatre! 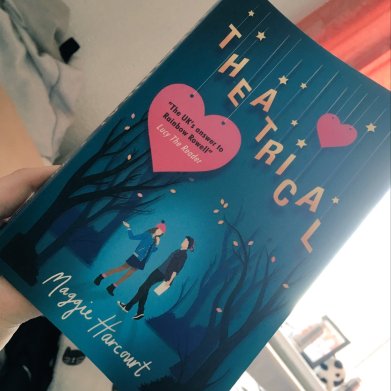 “Hope dreams of working backstage in a theatre, and she’s determined to make it without the help of her famous costume designer mum. So when she lands an internship on a major production, she tells no one. But with a stroppy Hollywood star and his hot young understudy upstaging Hope’s focus, she’s soon struggling to keep her cool… and her secret.”

Theatrical follows the story of Hope, a young girl who is trying to make her name in theatre, without people knowing who she really is. She’s fed up of being handed opportunities because of who her mother is. She wants to make a name for herself, to fight her own battles and to find her own corner of the theatre world. Her mother is a well-known costume designer and a big name in theatre, but Hope has no interest in costume design (much to her mother’s disapproval), she wants to work backstage. That’s where the magic really happens for Hope.

When Hope is offered a chance to work on a production in a theatre, she snaps up the chance, without knowing exactly WHO will be working on this production. Imagine being Hope in that scenario. You’ve just been offered your dream opportunity (to work in a production) and then they announce that one of the biggest names in Hollywood is also working on this production, along with another pretty famous name (and the two have a connection). Hope is gobsmacked (so would I be…. I have 0 chill… ask anyone who knows me!).

Keeping secrets from her mam and her friends, Hope ends up a bit jumbled in her life, and when she ends up in the papers, things end up blowing up in her face. Poor Hope. But she’s living her dream. She’s doing the thing she wants to do. She’s living her opportunity.

I really REALLY loved Hope. She’s a marvellous main character. She made me laugh a lot. She’s sweet, brave and she’s not afraid to stick to her guns. She’s a main character you really root for and I need that with my main characters. Along with really falling for her, there was part of me that felt like I know her pain. Making a name for myself this year as a teacher, outside of my normal role has been a thing.

This book, just like Unconventional, made me really smile. I think there’s something to be said for Maggie’s incredible ability to write books that just make me so happy. There’s not enough books out there that are just happy books (if you can recommend me any then I will take them off your hands because I love a feel good book!).

A quick shout out to the romance in this book because I’m ALL ABOUT IT.

My goodreads review of Theatrical reads:

Another of the things that I loved about Theatrical is how nostalgic it made me for the theatre itself. I loved the backstage secrets and the glimpses into life as someone who works in the theatre. As a massive Carrie Hope Fletcher fan (I wonder if that’s where Hope came from?!), it was lush to see what life is like on that side of the curtain. I’m very lucky in that I’ve had the chance to see Matilda the Musical twice and both times it just blew my mind. (I rambled on about it in my first ever blog post… Matilda The Musical).

Just recently though I had the opportunity to go and see an outdoor performance of A Midsummer Night’s Dream and it was wonderful. The acting was incredible. It was funny, irreverent and I was engrossed the entire way through. There’s something to be said for the wonder of Shakespeare himself.

I think there’s something really magical about going to the theatre and Theatrical really manages to encapsulate that.

Thank you for sticking with me… this ended up being a LONG one.

Check out the rest of the blog tour! Just look at how many people there are on the tour! There’s going to be some cracking reviews. I can’t wait to see all of the love for the theatre too! Share your theatre love stories with me on twitter, use the hashtag #Theatrical for the world to see too! Let’s show all those actors/actresses/directors and stagepeople how much we love the theatre!