Night Speakers: a magical tale of finding friends and allies in unsuspecting places 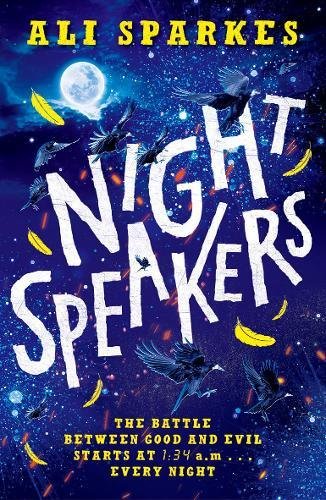 “Night after night Elena, Matt and Tima wake at exactly the same time, with no idea why. It’s messing them up and fracturing their lives … until they venture out into the dark and find each other. And then the sleepless trio realize their astounding power – they can speak any language; they can even communicate with animals. But something is happening over on the industrial estate – something which is emitting sounds that only they can hear, and killing any winged thing that crosses its path. There’s nobody to fight it but themselves, for only they can possibly understand it and what it means to do … “

Imagine being woken up at 1:34am every day (I hate waking up at any point during the night, so knowing that I was going to wake up at 1:34 every night would DRIVE ME MAD). Imagine not knowing WHY you’re waking up. Imagine there being a strange feeling around. There’s something not right. Someone’s watching you. Or is it something? You’re not really sure.

This is what is happening to the teenagers in this book. They’re all awake in the middle of the night. Initially, there’s nothing to think of it… but when they get their heads together, they share that they’re all awake at the same time. Things start to happen. They meet in the dead of the night to try and figure out why they’re awake. What is going on to make them be awake? Why just them? Why do they all feel like they’re being watched? Why do they feel like they need to fight?

Not only do the teens have to contend with this waking up lark, but there’s also a discovery that they can communicate with things they’d not been able to before. Imagine being able to speak to animals. Imagine them understanding what you were saying. That’s some power that is. These brilliant teenagers have that. It so easily could be used for bad, or good… the battle between good and evil roars on. An ability to communicate with nature, not just animals, is explored in this brilliant book too. (I can’t decide if I’d embrace or shy away from this ability…)

The characters are brilliant. They’re each very defined and distinct. Some conflicting personality traits, but like everything, seeing the overall picture is the one important thread. They were gutsy and brave. They made decisions that adults definitely wouldn’t. They took risks. I read this book with a bit of admiration for them. Kids are brilliant protagonists as they still have this awe and wonder about the world – sometimes lacking in adult characters. I distinctly remember one scene making me cry too…

I absolutely adored the imagery and the use of language in this book too. It was one of those cases of “getting lost in the world” and I think it’s exceptionally well written. The slow and steady feeding of information and images through the book keeps you wanting to read, to find out what happens next. To find out what this big evil is. To find out if the kids manage in their quests to overcome the evil.

I’m massively looking forward to more from this series… I’m hoping it is a series! I’d love to meet these kids and their friends again.

Thank you so much to OUP for sending me a review copy!

Let me know in the comments, or on twitter! I’d love to talk about this magical book! You know how I feel about magical books…