Today I have the absolute joy of hosting the brilliant Sophie Anderson, author of the gorgeous The House with Chicken Legs, on my blog. She’s here to talk all about one of her favourite Russian fairy tales and what it means to her. 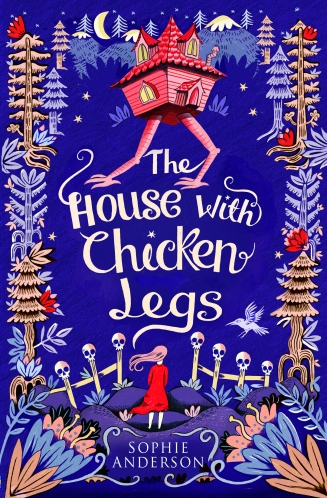 The House with Chicken Legs is BRILLIANT. My review will follow in the coming days, but I can not wait for you all to read it because it’s an incredible story which kids and adults alike can adore. Can we also appreciate that cover please?!

Fifteen Russian Fairy Tales and What They Mean to Me

‘If you drop Vladimir by mistake, you know he always falls on his feet …’

In this Russian fairy tale, retold and published by Arthur Ransome in 1916, Vladimir is a tomcat who is always fighting. He has lost an ear in a fight and is ‘not very pretty to look at’. His owner decides to get rid of him, bundles him into a sack, and abandons him deep in the forest.

Vladimir tears his way out of the sack and sets off to explore the forest. He was head-cat in the village he came from and decides he shall be head of the forest too, so walks along like ‘the Tsar himself’. He finds an abandoned forester’s hut and moves in. When hungry, he catches birds and mice in the forest, and when tired he sleeps in the hay loft. But he is not content, as he must catch all his own food and do all the work for himself.

One day, Vladimir meets a pretty young vixen and tells her his name is Cat Ivanovitch and that he has been sent from the far forests of Siberia to be Head-forester over all. The vixen is impressed and invites Vladimir to her earth, where she feeds him tasty game. She asks to be his wife, and spends each day catching game for her grand husband.

Wolf and Bear leave their offerings near the earth and decide to hide nearby, hoping to get a glimpse of the Great Cat Ivanovitch. Wolf hides amongst dead leaves beneath a bush, and Bear climbs to the top of a fir tree.

Vladimir emerges from the earth and begins eating the ox, purring as he does so. Wolf moves his head, attempting to get a better look, and the leaves around him rustle. Vladamir stops eating and listens. Thinking the rustling is a mouse, Vladamir leaps onto Wolf’s nose with claws extended.

Wolf yelps and Vladimir, startled, darts up the fir tree. Bear, at the top of tree, thinks the Great Cat Ivanovitch is attacking him and jumps down, breaking branches and bones along the way. Wolf and Bear run off, terrified and …

‘Ever since then all the wild beasts have been afraid of the cat, and the cat and the fox live merrily together, and eat fresh meat all the year round, which the other animals kill for them and leave a little way off.’

When I first heard this tale, I wasn’t quite sure what to think. I started off feeling sorry for poor Vladimir, abandoned in the forest. But he lands on his feet, and by the end of the story is head of all the forest. I wondered if I was meant to admire his tenacity and resourcefulness; his ability to turn his luck around.

But how he achieves success is morally questionable. He lies to the vixen, and is lazy, making her do all the hunting. By the end of the story I felt sorry for the vixen, the wolf and the bear, who had all been lied to and tricked into hunting for Vladimir. However, I also felt they were partially responsible; for believing Vladimir without question, and for wanting to ingratiate themselves with the Great Cat Ivanovitch. I felt particularly cross with the vixen, as she offered to marry Vladimir simply because he was Head-forester, and she perpetuated his lies.

It seemed to me they might all be in the wrong; Vladimir for lying, and the others for believing him. But then again, it didn’t seem fair to blame the others for simply being trusting. After all, I don’t think it would be good to assume everyone we meet is lying to us. The story made me think about trust versus suspicion, and at what point it is important to do some fact checking.

Certainly, before you marry someone, or work for them, or repeat what they have told you as fact, I think it is a good idea to be sure they are being honest. The vixen, the wolf, and the bear, only ever hear Vladimir’s story – that he is Head-forester – and accept that as fact. But if they had checked his story, done a little research, listened to the thoughts and opinions of others, perhaps they wouldn’t have been fooled so easily.

As I have grown older, this lesson has become only more relevant. The internet has appeared and grown to unbelievable proportions. Endless information is out there, easily accessible, yet still people are fooled by cats like Vladimir. Still people share information without fact checking, like the vixen. And still people rise to power through morally questionable actions.

Perhaps if we all sought out and listened to more than one side of every story, then cats like Vladimir (or Trump) wouldn’t have so much power.

The Cat Who Became Head-Forester can be found in Old Peter’s Russian Tales, written by Arthur Ransome, published by Puffin.

The House with Chicken Legs by Sophie Anderson publishes in paperback, 3 May, £6.99 from Usborne.

Go check out the rest of the blog tour, there are sure to be more incredible stories like this one to be shared! 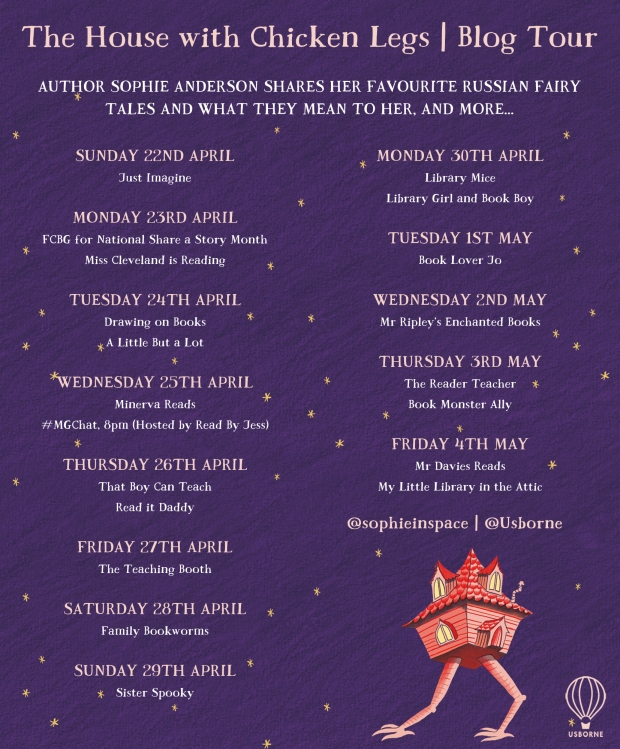 3 thoughts on “BLOG TOUR: The House With Chicken Legs”