Hero at the Fall: a fitting end to a trilogy I adored 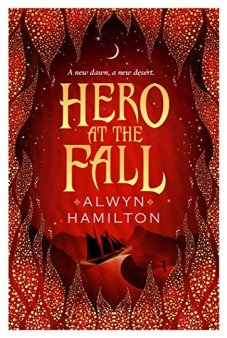 “When gunslinging Amani Al’Hiza escaped her dead-end town, she never imagined she’d join a revolution, let alone lead one. But after the bloodthirsty Sultan of Miraji imprisoned the Rebel Prince Ahmed in the mythical city of Eremot, she doesn’t have a choice. Armed with only her revolver, her wits, and her untameable Demdji powers, Amani must rally her skeleton crew of rebels for a rescue mission through the unforgiving desert to a place that, according to maps, doesn’t exist. As she watches those she loves most lay their lives on the line against ghouls and enemy soldiers, Amani questions whether she can be the leader they need or if she is leading them all to their deaths.”

Hello, my name is Steph and I ABSOLUTELY adore the Rebel of the Sands trilogy. If you are unware of this trilogy, it follows the incredible Amani (a gunslinging, sand–controller) who ends up part of an excellent army of rebels trying to overthrow the cruel Sultan. Over book 1 and 2, Amani ends up part of the incredible band of merry men (she’s like a modern day female, brilliant Robin Hood) and they’re just MAGNIFICENT. I’d totally recomment you read this trilogy – there’s sand, magic, brilliant friendships and peril. SO MUCH PERIL. (See my reviews: Rebel of the Sands review and Traitor to the Throne review)

Anyway, I’m here to talk you through my sheer joy and UTTER SADNESS that this trilogy is over. That’s how I feel: it’s a bittersweet time of my life. I have ADORED this trilogy and reading Hero just proved to me why this series is special. The storytelling, the characters, to magic, the mythical elements, Jin (be still my heart), the progression of the characters, the closure. It’s just wonderful. Alwyn is an incredible author and I’m excited to see what’s coming next!

One of the things that hit the hardest about this book was the sense of family and belonging that Amani gets throughout. The gang get back together and you see her in her element with all the people around her she loves. The characters, both new and old, blew me away at times. Their actions speak volumes. The new characters add a whole new level of brilliance for me. These books wouldn’t be as massive a hit for me if it weren’t for such an excellent bunch of characters. They balance each other out. They complement each other. There’s moments throughout of reminding me why I fell in love with them all individually, but collectively too. They fight for each other; the fight WITH each other but they stick together and fight for the same brilliant cause.

Another of the things that’s been prevalent throughout the whole series is the myths and fairytales beautifully woven into the plot. I am a MASSIVE fan of this. I think it adds intrigue and interest to books, it gives them a history that you couldn’t have without them. Hero features, among others, 2 massive new myths which both are incredible. There’s a remarkable parallel between what the characters are going through now and what the story tells of. Amani and Jin have their own moment of life imitating art which absolutely BROKE MY HEART and put it back together again. (More on Jin later).

As I read through, there was an absolute need to read more and know how things were going to end. I wanted to see where these characters were going to end up, how their stories ended… and I was SO satisfied with the ending. The arcs and progressions of these characters is something I adore. Amani herself goes on quite an important journey of accepting herself, accepting her varying position in the group, and her battle with some tricky decisions was a brilliant plot line to watch unfold.

You get the chance to revisit locations from book 1 and 2 in Hero and it made my heart so happy. Revisiting Dustwalk and the location of the camp in particular gave me flashbacks, reminding me of books 1 and 2. It was gorgeous to have those nods to the past 2 books, whilst still bringing in brand new locations, characters and plot. There’s a satisfying amount of loose ends tied up by the end of Hero, which for me makes me happy. There’s nothing worse than knowing a trilogy is ending and having a whole load of unanswered questions.

Jin. Oh Jin. *heart eyes* I love him. I think all of my reviews of this trilogy have had their own Jin paragraphs. I’d like my own Jin. He’s such a brilliant human. I adore him. I adore his and Amani’s relationship. They’re just lovely. They balance each other out so much. He’s smooth and mellow, a total opposite to Amani, who can be like a tight knot at times. I’m glad they got the ending they did. They deserve it. I am all for a happy ending (it’s not without its rollercoaster though).

I need to take a moment here to mention my sheer appreciation for the cover (and the covers of the trilogy). They are EXCEPTIONAL and look brilliant together. I am a sucker for some gold.

Where does Hero stand on the crying front? (I know you all know I’m a crier) I CRIED SO MUCH. I reckon I cried for the last 100 pages or so. SO MANY TEARS WERE SHED. It’s SO SO SO WORTH IT THOUGH. There’s scenes that deserve the tears; some were heartbroken tears; some were disbelief tears; some of the tears were sadness at saying goodbye.

So if you hadn’t guessed from this review… I really quite LOVED Hero at the Fall and would ABSOLUTELY recommend the whole trilogy. Please go out and buy them, if you haven’t already. SO WORTH IT.

Have you read Hero at the Fall?
Do you think you’d be as badass as Amani?
DO YOU LOVE JIN TOO OMG?