So here we are again… the rest of the day to round up! I feel like I could natter on about YAShot for more than 2 blog posts, but I will keep it short and sweet (well… no. I’ll not go on for hours!) If you haven’t already read my first blog post then you’ll find it on my blog! Please check it out! 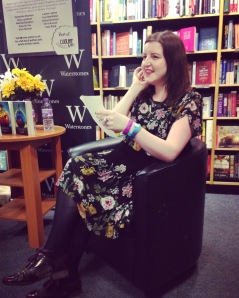 For those of you who don’t know Mel… well you should because I have written blog posts about her and tweet about her books often… she is the author of The Sin Eater’s Daughter and The Sleeping Prince. Both majestically, heart breaking, soul crunching but incredible books.

She was in conversation with Julia Gray. Melinda Salisbury and Julia Gray: A Touch of Evil. And what a conversation it was! They talked about their books and the subject of evil. There were some interesting questions asked in this conversation too about how detached or attached the authors were to their stories, either before or after they were sent in. This was never something I thought about, but as the authors had two very different opinions on, it’s fascinating. I loved the idea for Julia’s book – it’s linked heavily to Norse mythology and wolves. It’s definitely one of those books that I will pick up when the time is right (i.e. when my TBR pile is not 100 books high!). They also discussed how the landscape of your story dictates the people in the story which dictates the society in your story. I found this panel ridiculously interesting. I knew I would love it. But it surpassed all expectations! It was certainly the busiest event that I was at that day!

After the event I followed the authors (not in a creepy way!) into the signing room to get my copy of The Sleeping Prince signed. I have my copy of The Sin Eater’s Daughter signed from an event last year in Seven Stories! (Coincidentally it was pretty much exactly a year after I had met Melinda that I got to meet her again!). After the signing I managed to sneak into the civic centre and hear Holly Bourne, Holly Smale, Harriet Hapgood and Rachel McIntyre talk about feminism and romance in YA. It was interesting hearing about these different authors and their takes on feminism and romance in their books. I have read all of Holly Bourne’s books so I know that feminism features heavily in them, so not having read any of the others it was good to know that there is a massive call for feminism in a wide variety of YA books. All of the women stressed the importance of normalising things such as girls working in science, looks not being important and even mentioned that in their books they tried to have good role models of positive relationships through the character’s parents. One thing I loved about this panel was at the end they gave out recommendations of authors who do it right in getting romance and feminism in YA and unanimously they recommended one of my favourite authors – Rainbow Rowell. Eleanor and Park is a must read in my eyes. I missed my chance to get ‘…And A Happy New Year’ signed because I needed to dash to another event. 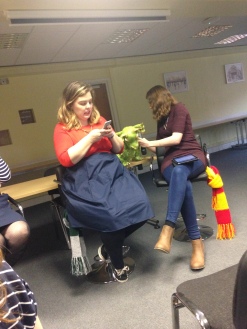 The next event I ran off to was Little Women: fantasy, gender, power and constraint – Alywn Hamilton, Zöe Marriott, chaired by Samantha Shannon. They even had a dragon! I didn’t get a picture with Zoe in unfortunately, I was too focused on getting the dragon in! Ha. This panel was a lot of fun. HOW I missed this Zoe book is beyond me… it’s based on Beauty and the Beast – which is only my most favourite Disney film in the world. They talked about their “strong female characters” in their books and the importance of writing into their book strong, positive female relationships. I hadn’t thought up until this point that there was a lack of positive female relationships in books, but as Alwyn said it’s probably because I seek out books that have those relationships in them! It was such a pleasure to meet Alwyn after so long too. Rebel of the Sands is an incredible story and I will be for sure be buying Zoe’s book. Beauty and the Beast? RIGHT UP MY STREET. 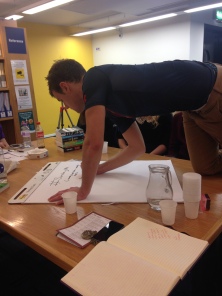 YAfictionados, Taking your blog to the next level.  It was incredible to meet Chris finally too. I’ve admired his blog from afar for ever. It’s incredible. He’s such a presence online that if there’s anyone to take tips from it is most definitely him! He’s the man responsible for #YATakeover. Stevie is a publicist so getting some insider tips is always good, especially for a blogger like me starting out. We talked about where we wanted to go with our blogs and they gave out some wonderful tips on how to try and make a stamp in the world of blogging. There are so many bloggers out there that you need to have a real stamp. I took a long list of things to do! As you can see he’s quite hands on! He climbed on the table to give us a list of hashtags to follow, chats to join in and people to follow too! I learned so much and had a million questions but I was FAR TOO blog struck to ask! It was so lush to meet other real life bloggers and get to talk to them about blogging. It helped that Chris was a very handsome man with an Irish accent! I love an Irish accent!

So that is part 2 of the whole thing! There’s a book haul/thank you post coming up in the next few days! YAShot week is really a thing here it seems ha!