This morning I come to you with an absolute corker of a blog post from the wonderful Lou Abercrombie – author of the brilliant new book, Fig Swims the World.

When I received this book, I was totally over the moon. I’m a MASSIVE fan of swimming (It’s in fact one of the things that I’m going to try and get back into once we’re allowed to be back in the world with other human beings because it’s so good for me, both physically and mentally!) and I was over the moon when the publishers asked if I wanted to host a stop on the blog tour. So here, on publication day, I have the absolute joy of hosting a piece all about Lou’s list of open water swimming!

I’ve been swimming all my life, but my obsession with open water started in 2013. If there’s a lake, quarry or sea, I’ll swim in it!  Here’s a few of my most memorable:

Off the coast of South Devon, Burgh Island is a private island with an Art Deco hotel where Agatha Christie wrote two of her novels.  It was my first proper open water swim and while it was a straightforward router, getting used to the tide and the waves and the saltwater was hard.  This was my inspiration for Fig’s first swim – Dinosaur Island.

This swim provided the inspiration for Fig’s 17th swim – the Mermaid Canal and I remember thinking about it as I was swimming. I have the best memories from completing this one, as I had my family cheering me along.  The elation and pride on their faces when I got out the water was wonderful.

This is the hardest swim I’ve ever done.  Training 3-4 times a week, building up to 8km, was tough and took a lot of time, energy and willpower, not to mention how hungry it made me! It’s also my saddest swim, as I had no one there for me when I got out.  The emotion of completing something that I had worked so hard to do hit me and I ended up bursting into tears in front of a complete stranger!

This swim is so popular you have to set your alarm at 7a.m to register and even then, you might not get a place.  After several years of trying, I finally got to do it in 2019.  The day was gorgeous, with perfect weather conditions.  Unfortunately, I let myself get psyched out by all the amazing swimmers who stormed past me. Then my goggles leaked the whole way round and I got a terrible rash burn from my thermal top and wetsuit.  All of which spoilt my enjoyment of what could have been a beautiful swim.

The Wild Wye was an amazing swim.  From getting in the river and being pulled along by the current, to seeing other swimmers laughing, chatting and generally enjoying the opportunity to swim in such lovely surroundings. Unfortunately, I got too cold and started to panic. Even asked the SARA volunteers who were standing along the course whether I had blue lips.  I was freezing and by the time I got to the finish line, a rope leading up a muddy bank, I could barely walk and ended up letting out a crazy tribal roar as the emotion of getting there hit me.  I ended up in the First Aid tent wrapped in a silver foil blanket.   However, this time I had friends looking out for me.  It’s amazing what a difference that made…

This is what got me into open water swimming, because I liked the idea of saying that I’d swum between Europe and Asia, across one of the world’s busiest shipping lanes! The enormity of the challenge hit me when we took a ferry along the route and I realised how difficult it was going to be, given the currents and choppiness not to mention the idea of literally being stranded between two continents!

This was the inspiration for Fig’s final swim – the Cross Continental.

I of course have a list of swims I’d like to do one day, most of which were also the inspiration for Fig’s swims.  They include:

What an incredible story to read! As a massive fan of swimming myself, I’d love to take on an outdoor swim one day… I just don’t think I’m brave enough right now! Maybe one day… this has certainly inspired me to start thinking about it though!

Massive massive thank you to Lou for writing this fascinating piece and to the publishers for asking me to be on the blog tour! Fig Swims the World is out TODAY! You can buy it online – be awesome, go buy it and support an indie bookshop! 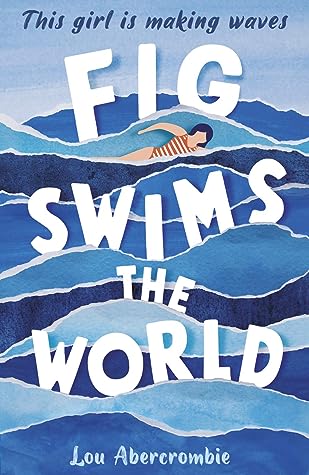 “Fig Fitzsherbert is good at a lot of things: making lists, playing the piano, advanced mathematics. But it’s never quite enough for her high-flying mother, who every New Year’s Day sets Fig an impossible resolution. So one year, Fig decides to set her own challenge instead: she’s going to swim her way round the world. There’s just one tiny problem … Fig can’t swim. Taking it one length at a time, Fig embarks on the adventure of a lifetime. But with her mother closing in, will she be able to keep her head above water and complete her challenge?”

Fig Swims the World by Lou Abercrombie, out TODAY from Stripes Publishing.