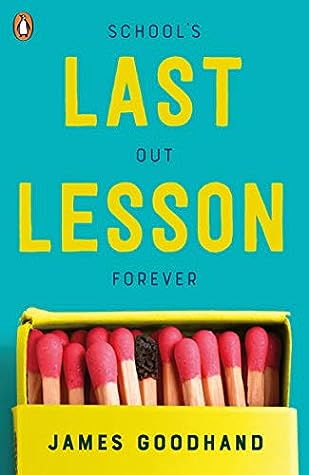 “Last year, Ollie Morcombe was a star pupil, popular and a gifted musician. Then, after the accident, everything changed. Now he’s an outcast, a prime target of the school bullies who have made his life a living hell. Today – the last day of the school year – he’s brought those bullies a gift. A homemade pipe bomb. What has driven a model student to plan an unspeakable revenge? And with the clock ticking down to home time, what can anybody do to stop him?”

The amazing humans over at Penguin books sent me a proof copy of this book (see below proof cover) and as soon as I read the blurb, I knew I needed to pick it up. I read it on my train journey down to London (when we were still allowed to be around other people) and I THOROUGHLY enjoyed it!

Last Lesson is the brilliant story of young Ollie, who plans to plant a bomb in his school on the last day of the year. It follows his story from being a popular member of his school community to being the boy who wants to bomb his school. You get the chance to sneak into the world of being a teenager in his school, the things he goes through and his pretty tricky life. He has a lot to deal with. This book is told in flashbacks and a run down of the last day of school and it’s so brilliantly done.

We all know I love a good character I can get behind.

I was initially VERY anti-Ollie (I mean who wouldn’t be? He’s bombing his school), but as you go through the story and you see what is going on in his life (an awful awful lot), you begin to question his motives and his reasons for it and maybe see a bit of humanity in him. As a teacher, it was really hard to read what Ollie was going through at school because there were just so many red flag from the actions of the teachers (one teacher in particular I wanted to murder because he was SO neglectful).

There is one teacher who is an absolute ray of light in Ollie’s life and I am so here for her – yes to positive representations of teachers in YA… we need more of these!

I had very conflicted emotions about his grandad too. He lives with his granded and while his grandad is super supportive and doing a super good job of raising Ollie, he’s got this very “men should be men and not cry” kind of toxic masculinity vibe going on about him. This doesn’t mean I didn’t think he was a good character. For this book and for the story, grandad was a brilliant character. He was part of the problem, but he also ends up being a bit of a ray of hope in all of it.

This book is a total emotional rollercoaster. I can’t lie and say I wasn’t gripped straight away. The premise alone was one that I needed to be part of. From the get go, you are in on the action. There’s a real sense of urgency about this story. You need to go through it greedily. You need to know what is going to happen. There’s so much you need to know the answer to. You go through this story thinking one thing, then another, then back to your first thought. You really go through it all with Ollie. Poor, poor Ollie.

There’s anger, disbelief, horror, love, hope and sadness all thrown into this book. I finished it feeling a bit of a shell of myself!

There’s some pretty tough themes in this book. It deals with toxic masculinity, rape, bullying and mental health issues. They’re all dealt with so brilliantly without shying away from some pretty harrowing scenes and the reality of some of these situations from a teenager’s point of view. I think this book will make people ask questions and I hope it will start conversations, which start conversations.

A massive massive thank you to Penguin for sending me a copy of Last Lesson. I hope you all go out and buy this book because it’s BLOODY BRILLIANT.

Have you read Last Lesson?
Can you share some more positive representations of teachers in YA?
What are your thoughts on this book?

Talk to me! I’d love to know what you think!