Now… for those of you who are new around here, there is an important message I need you to take from today:

I am a MASSIVE Matt Haig fan.

I think he writes BRILLIANTLY. He’s one of the few authors who I read ANYTHING they release (non fiction, adult, MG). In fact, I’d go so far as to say I’ve read ALL of his books… I may even OWN them all (if not all of them, MOST of them!) I’ve reviewed quite a few of his books on here, but I recently read Evie in the Jungle (the Worls Book Day 2020 book by him) and thought this was the opportune moment to FINALLY review Evie and the Animals and Evie and the Jungle!

Evie and the Animals: a great story about the importance of kindness

“Ten-year-old Evie has a talent. A SUPERTALENT. Evie can TALK to animals and HEAR their thoughts. Pretty amazing, isn’t it? One day at school, Evie sets Kahlo the rabbit free from her too-small cage. Evie knows she’s done A Good Thing . . . but it lands her in BIG trouble. Evie’s dad and Granny Flora say her talent is a curse; she must never use it again. Until a year later pets on her street – including Lady Gaga the cat and a hamster named Cheryl – start disappearing. Evie is determined to find them. But it’s dangerous for her to help. Because the villain has a talent of their own, and only wants to use it for evil… Can Evie save the pets before it’s too late, even if it means DARING TO BE HERSELF?”

Evie and the Animals is a gorgeous story where Dr. Dolittle meets modern day issues to do with conservationism and activism!

Evie has a special talent: she can understand other species. She can talk to them and she can hear what they are saying. Whether it’s the dogs of the neighbourhood, the school rabbit who wants to be set free or even scarier animals, Evie can hear them and talk to them. For so long she’s been ignoring them because she doesn’t want to be different (don’t we all worry about this!?), but when they start to go missing, Evie knows she needs to do about something about it. She knows she needs to use her power to try and help.

This book has one of those brilliant things that kids are instantly hooked into. It’s exciting and enticing – who wouldn’t like to talk to animals?! We’ve had loads of chats about what animals the children would talk to if they had Evie’s powers (with answers ranging from tigers, to worms and pets, it’s been a topic of hot debate in the classroom!)

This book is full of elements that kept me wanting to read. There’s mystery, talking animals, scary moments (scary big cats at the zoo), bad guys and powers.

Evie is a brilliant main character. She’s full of heart and gusto. She’s got a brilliant message to deliver to children about being kind and the power behind those acts of kindness. She’s caring and gentle to both the people around her and the animals she encounters. Plus, she’s on her way to solving a mystery!

My Goodreads review of Evie and the Animals:

Evie and the Jungle: a new adventure into the Amazon! 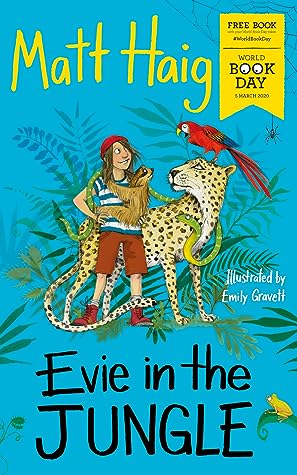 “Twelve-year-old Evie has a talent. She can HEAR what animals are thinking and she can TALK to them with her mind. When Evie goes on a trip to the Amazon rainforest, her powers are put to the test. She makes friends with pink river dolphins, must save an injured sloth, and discovers the secret life of a jaguar. Soon she sees that the jungle is in serious and deadly danger, and comes up with a rather risky plan to help save it…”

Evie in the Jungle is a wonderful addition to the Evie family of books. She’s a brilliant protagonist that children might know from the first book, but I don’t think you NEED to know her as this book stands by itself if necessary.

This second adventure takes us on a fascinating (and sometimes a little bit scary!) trip all the way to the Amazon Rainforest, where we hear about Evie’s adventures in Peru with her dad. Evie and her dad have the chance to meet all kinds of incredibly exotic animals, including an adorable sloth, some very rude monkeys and a downright rude Scarlet Macaw. They go to help save so many of these animals who are affected by the destruction of the rainforest.

One of the things I loved about this book is that there are so many facts jam packed into it that it appeals to my wonderfully science loving class! I learned that pink dolphins exist (no, I didn’t know that!) There’s some pretty shocking facts to be learned in this book too: humans are destroying enough rainforest to fill 30 football pitches every minute; 35 species of the Amazon Rainforest become extinct every day.

This book is an exciting and fun story, with lots of very important messages about looking after our planet, being kind to each other and the importance of doing good things. It’s got wonderful messages about compassion and honesty too. It’s a perfect length for new readers without being intimidating!

And that’s it! Completely and utterly recommend these books (and the rest of Matt Haig’s catalogue of books too, if you’re after some recommendations!)

Have you read any of Matt Haig’s books?
Can you recommend me any more books with similar messages?