A Cake for Gestapo: a great historical novel full of heart

“Slotting in beside THE MACHINE GUNNERS and WAR HORSE, A CAKE FOR THE GESTAPO tells the story of a fictional gang of kids in Jersey during the German Occupation in WW2, weaving in very real islanders’ own stories of the Occupation at its core – A history that has never before been told in children’s literature. June 1940. As World War Two rages on, for Joe, Spinner, Ginger and Clem life continues as normal on the small island of Jersey. Dealing with school bullies and angry parents, none of them really believe the enemy will invade. That is until the island is bombed and Joe is injured. Outrage turns to terror. The grownups avoid the Germans, but the gang have a plan. Playing tricks on the soldiers, they trip them up in their every move until their plan lands them and the whole community in terrible, mortal danger. The threat of starvation begins to hang over the islanders as the German occupiers tighten their grip, but the gang refuse to give up. What if they could take down one of the German s most dangerous leaders? What if they could defeat the cruel and terrifying Viktor?”

This book is set in Jersey and takes place over the space of two years of the German Occupation during World War Two (1940-1941). The focus of the story is a group of school children forming a club who are set on annoying the German soldiers as much as they can. The story follows them through what happens as the war drags on and what happens to them in the 2 years that the book spans. There’s loss, heartbreak, laughter and frienship: a great mix in my eyes!

As we’ve just read Letters from the Lighthouse by Emma Carroll, a lot of my children have been curious about this book! We are digging WW2 stories at the minute. You can’t beat a good bit of historical fiction in our lives!

The dynamic between the children is wonderful to read and definitely sets the scene for some wonderful friendships! Their actions made me chuckle at times. Who wouldn’t want to throw berries at opposition soldiers? Sometimes it is hard to differentiate between children in groups, but each child was written well enough for me to be able to know who was who with ease. They don’t shy away from some threat at times and I was definitely worried for them at different points: their understanding of REAL DANGER was questionable sometimes (but I think this was what made the book more readable because we all know kids who would embrace this!). The children go through a lot in the story with some of them playing more adult roles than they should be playing: carers, defenders, providers, housekeepers and support networks for each other and their parents.

I loved that this story had quite a big focus on the impact the war had on the island and its inhabitants. It didn’t shy away from the fact that war dragged on and the people became more impatient and frustrated with the war. The story was quite difficult to read at times because war is a tough thing. This book has moments of real peril, heartbreak and loss.

A Cake For The Gestapo is a well written and exciting story filled with danger, peril and heart. You’ll find it hard not to fall for the characters and their shenanigans.

Have you read A Cake for Gestapo?
Can you recommend me some WW2 fiction?
What time period would you love more fiction from?

A massive thank you to the publishers Zuntold for inviting me to be part of this exciting blog tour! GO check out the other stops on the tour and find out what everyone else thought! 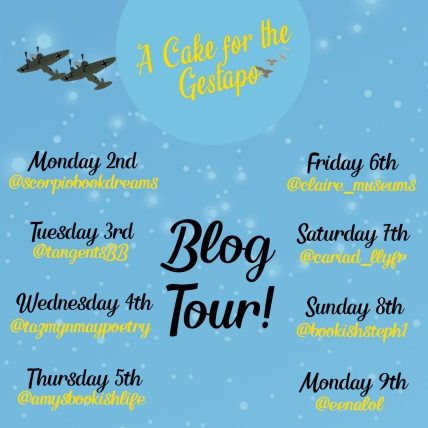 One thought on “BLOG TOUR: A Cake for Gestapo”