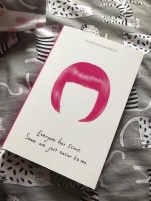 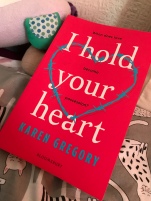 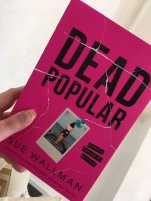 “Ava Lee has lost everything there is to lose: Her parents. Her best friend. Her home. Even her face. She doesn’t need a mirror to know what she looks like–she can see her reflection in the eyes of everyone around her. A year after the fire that destroyed her world, her aunt and uncle have decided she should go back to high school. Be “normal” again. Whatever that is. Ava knows better. There is no normal for someone like her. And forget making friends–no one wants to be seen with the Burned Girl, now or ever. But when Ava meets a fellow survivor named Piper, she begins to feel like maybe she doesn’t have to face the nightmare alone. Sarcastic and blunt, Piper isn’t afraid to push Ava out of her comfort zone. Yet Piper is fighting her own battle, and soon Ava must decide if she’s going to fade back into her scars . . . or let the people by her side help her fly.”

I Hold Your Heart by Karen Gregory

“When Gemma meets Aaron, she feels truly seen for the first time. Their love story is the intense kind. The written-in-the-stars, excluding-all-others kind. The kind you write songs about. But little by little their relationship takes over Gemma’s life. What happens when being seen becomes being watched, and care becomes control?”

“Stella Grant likes to be in control—even though her totally out of control lungs have sent her in and out of the hospital most of her life. At this point, what Stella needs to control most is keeping herself away from anyone or anything that might pass along an infection and jeopardize the possibility of a lung transplant. Six feet apart. No exceptions.
The only thing Will Newman wants to be in control of is getting out of this hospital. He couldn’t care less about his treatments. Soon, he’ll turn eighteen and then he’ll be able to unplug all these machines and actually go see the world, not just its hospitals.
Will’s exactly what Stella needs to stay away from. If he so much as breathes on Stella she could lose her spot on the transplant list. Either one of them could die. The only way to stay alive is to stay apart. Would five feet apart really be so dangerous if it stops their hearts from breaking too?”

“The reigning queen bee, Kate, knows that you don’t become the most powerful girl at school by playing nice. But when other students start revealing long-held secrets anonymously, she realizes someone is playing a much more dangerous game – and they know too much about Kate’s past. If she doesn’t figure out who’s behind this, her final year at Pankhurst could be exactly that: her final year.”

PHEW. There we go! Just 4 of the YA books I’ve read recently. I really enjoyed them all! If I had to pick a favourite though, I’d have to say Scars Like Wings would just snatch the title from I Hold Your Heart (seriously though, someone else be angry with me!).

What have you read recently?
Have you read any of these books?
Can you recommend me a book?

Talk to me! I wanna know what you think of my wrap ups: do you like them? Do you prefer my full reviews? Do you not care? (ha!)

One thought on “BOOK BLOG: YA wrap up!”