Today we have a very special post from author Morag Hood who is here to talk about how she came up with her character Sophie Johnson and how she developed.

I love hosting authors because it’s really interesting getting an inside peek at their creative processes.

Where did the idea for Sophie come from and how did she develop?

The character of Sophie initially came about when I was thinking about picture books in general. One of the things I like most about the format is the tension that can be created between the words and the pictures. I’ve always especially enjoyed books where the reader knows what is going on better than the characters themselves. I think I am probably quite in touch with my inner four-year-old and I seem to remember relishing that feeling of being in on the joke and being smarter than the characters in a book. It was with this in mind that I started playing around with the idea of the main character being oblivious to what is going on around them, and Sophie started to emerge.

She has been such a fun character to write and develop. She is very forthright and certain, despite not necessarily having understood a situation, and she loves to explain everything, while in actual fact knowing very little about what is truly going on! Once I worked out her voice and perspective on life, I started to come up with scenarios in which she could shine.

My editor at Simon & Schuster, Helen Mackenzie Smith, gave me a brilliant note about thinking of Sophie as giving an interview about herself and I try to hold that in my head whenever I am writing for Sophie. The first book, Unicorn Expert, came about partly because it was the first book I was writing for someone else to illustrate and I tried to think of something I wasn’t very keen on drawing but would be fun for another illustrator! And then I had so much fun with the first one that I wanted to give Sophie some other things to do. She became a Detective Genius because, as well as having a personal love of detective stories, I felt it would give lots of room for her getting things wrong and missing some fairly obvious clues. I always enjoyed the rather hapless police officers who are outwitted by clever detectives such as Hercule Poirot, or Jessica Fletcher, so having Sophie outwitted by her dog seemed to fit well into her world.

Sophie Johnson has been such a fun character to create and work with, dancing the fine line of being over-confident while still being likeable. I think a lot of that likeability comes from Ella Okstad’s joyful illustrations. It really has been a treat to see how the book has come together with Ella’s input. The pictures are so full of life and really help to make Sophie endearing.

Sophie Johnson: Detective Genius is a WONDERFUL picture book and it has the most incredible cover. It is sparkly goodness. 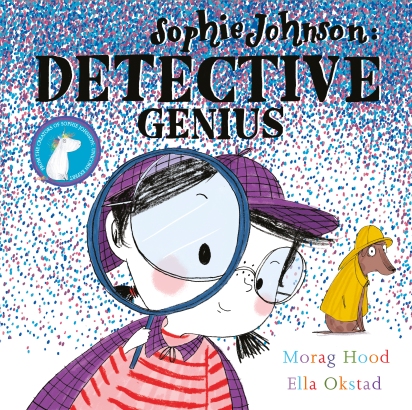 Sophie Johnson studied very hard to become a detective and it’s a good thing she did – there has been a terrible crime!
Someone has stolen Lion’s tail. Unfortunately, this means that Sophie doesn’t have time to train her new (and not very good) assistant, Bella. However, is it possible that, while Sophie is busy rounding up suspects, she doesn’t see that Bella may be better than she thinks?
The Sophie Johnson series is perfect for bright young minds and great fun to read aloud as children spot what’s really happening in the story right under Sophie’s nose!

Sophie Johnson: Detective Genuis is out now! You should all go and pick it up!

Massive thank you to Morag and the publishers at Simon and Schuster for inviting me to share this wonderful blog post! Happy reading!