Call Me Alastair: touching, charming and filled me with hope! 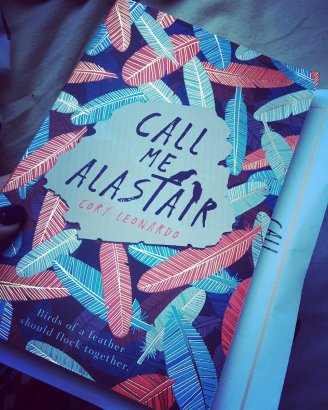 “Born in the back of a pet store, Alastair the African grey parrot dreams of escape, to fly off with his beloved sister, Aggie. But when Aggie is purchased by 12-year-old Fritz, and Alastair is adopted by Mrs Albertina Plopky, Alastair’s hopeful vision for the future crash-lands. In-between anxiously plucking his feathers, chewing a few books, and finding his own poetic voice, Alastair plots his way to Aggie and their flight to freedom.

This debut novel is a heart-felt, bird’s-eye view of love and what it means to break free from the cages we build for ourselves- and the courage it may take to finally let go.”

It’s not every day you pick up a book that is written from the perspective of a grey parrot, and I’m not going to lie… that was half of the reason I picked it up. The other half was the cover. JUST LOOK AT THAT COVER MAN. However, once I’d picked it up and started it, I found a book that packed a punch, had some BRILLIANT messages and made me feel ALL of the feelings.

Call Me Alastair follows the story of Alastair, an African grey parrot, who loves poetry, his sister and cherries, and his exploration of freedom, love and loss. When we start the book, he’s living in the pet shop surrounded by some brilliantly hilarious fellow pet shop inhabitants. It was so lovely to read a book told through the eyes of a parrot – it’s not often you get to read a book from an animal’s perspective and that was totally refreshing. It really really helps that he’s really endearing too!

As the book progresses, we get to the inevitable – the two parrots (Alastair and his sister) have to be separated. Aggie is taken in by a brilliant young man, Fritz, who has aspirations of being a doctor and Alastair is taken in by Bertie, a wonderful old woman. What ensues is an adventure to try to get his sister back, while trying to ensure that everyone around him stays happy.

We see this story through three different perspectives and I think my favourite was Bertie’s – the old woman who decides to buy Alastair. She decides to buy Alastair to help with her loneliness, broke my heart. She writes letters to her husband. It was heartbreaking to read these letters to him. She just wants someone to talk to, and as always in life, you find these things in the most unlikely of places!

Alastair is a brilliant character to read because he’s quite dimensional (as much as an African grey aprrot can be I guess!) There are so many nods to sadness from Alastair, and in an MG book it’s important. It’s important for kids to know that you can feel sad and that people will care about you and try to help! He’s funny, sweet and charming. I really liked him!

My Goodreads review does the honours of reviewing this book in a much more concise way:

Call Me Alastair is out now! A massive thank you to publishers Scholastic for sending me a copy to review!