Kevin: a wonderful story with the most brilliant of imaginary friends

“Uh-oh – Sid Gibbons is in trouble again! Time to think fast…
When Sid makes yet another mess, and his mum is at the end of her patience, Sid does what every quick-thinking kid would do – he blames it on his big, furry, vanilla-and-pink friend Kevin! And while it seemed like a good idea at the time, Sid gets an unexpected surprise when he finds out that Kevin and his world might not be so imaginary after all – and while his friend might be make-believe, his feelings are very real.” 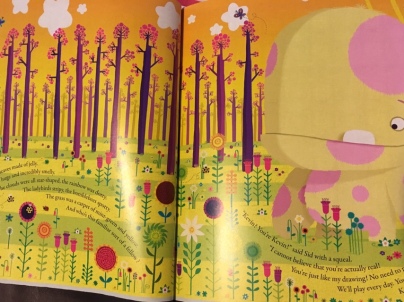 Kevin tells the story of young Sid who is forever getting into a bit of a mess, but forever blaming his imaginary friend, Kevin. What Sid doesn’t realise is that when Kevin comes along, there’s consequences to his actions that he has never considered. When he goes into Kevin’s world, he doesn’t act in the best ways and this isn’t good for Kevin. Upsetting your friends never works out for the best. Sid has to learn how to make it up to his friend.

I absolutely adored this book. The 2 worlds of Kevin and Sid and how they collide. They’re the same but different. The rhyming pattern. I love a rhyming book. It amazes me when authors manage rhyming books! The incredible illutrations. I mean just look at those pages, look at those characters. They’re just gorgeous. The empathy that Sid learns through meeting Kevin. Teaching kids a message through a book is brilliant. It’s one of my favourite things about picture books. It can teach kids an important message, without being condescending. It delivers the message on their level. The difference in the colours between Kevin’s world and Sid’s world. The comparison from Sid’s world at the beginning to the end.

Kevin is the most adorable character and kids will absolutely adore him!

Have you read Kevin?
Did you ever have an invisible friend?
What other stories can you recommend to me that teach kids about empathy?

Talk to me in the comments, or tweet me! My picture book collection only needs to be built! (Sorry bank balance!)