The Scarecrow Queen: the perfect ending to a wonderful trilogy.

“As the Sleeping Prince tightens his hold on Lormere and Tregellan, the net closes in on the ragged band of rebels trying desperately to defeat him. Twylla and Errin are separated, isolated, and running out of time. The final battle is coming, and Aurek will stop at nothing to keep the throne forever …” 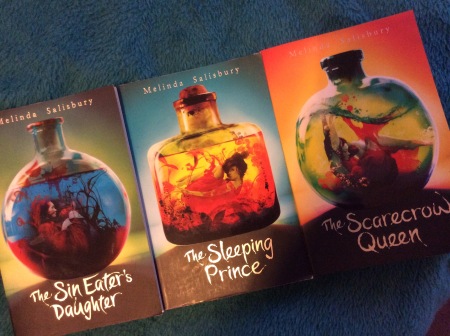 This book is one of the books from my most looking forward to of 2017 and it did not disappoint. I have many feelings about this books and I am going to find it hard to write about it without spoiling either of the previous books in the series, but I will try my hardest.

You’re told this story from the perspective of both Errin and Twylla – the two main (badass) characters from the two previous books and I loved that. Twylla very much came into her own in this book. She became the leader, the complete Dauen Embodied that the people wanted. With her townspeople in a sheer state of terror she has to step up to be the leader that she was always meant to be. She goes about it wrongly initially but then she is guided in the right way by some exceptional new characters. Watching Twylla’s transformation from the first book to this shows her true character – from a frightened, feared “goddess” in the first book to the true leader that she was meant to be in this. Her journey was incredible to read. Errin on the other hand is very much in someone else’s control. I hated the treatment of Errin in the book, I had so much anger towards her controller but because Errin is the character she is, she’s the fighter, the one who never gives up, such spirit, you know that she’d get there. Her family being so important to her, they are her Achilles heel, she puts up with an awful lot of torture in this book for them. For me the girls have been the stand out in these stories. The men (Merek, Aurek, Silas) have played important roles but it is incredible to watch these girls transform and stand up for what they believe in. More books need young ladies like this.

The last few lines gave me so much joy. So much joy. But don’t skip ahead. You need to experience the whole pain, the success, the failure, the cold, the warmth to appreciate the last few lines. The plot of this is so wonderful – you see Twylla and Errin fighting for the things that mean the most to them, their people, their families, their power. There are moments of disbelief, moments of love, friendship, joy. You won’t know where you stand emotionally from one moment to the other. There is such a contrast between Twylla’s journey through TSQ and Errin’s – the juxtaposition between freedom and imprisonment was something that had me gripped from the start. From the castles, to the woods, to the camps and the towns… it’s all gripping and believable. The whole world that Melinda has written is so believable. I would love to visit.

My goodreads review does this book NO justice: “What an incredible ending to one of the most majestic, dark, daring and wicked trilogies I’ve ever read. This book gave me EVERYTHING I wanted and so much more. I admire Twylla and Errin so much – they stand up for what they believe in, unashamedly and unabashed. I loved this book. It was the perfect ending. I am so sad it’s all over though :(“

I can not wait to see what Melinda Salisbury comes up with next. If it is deliciously evil as TSED has been then I will be the first in line for it!