Was the longest week in the world.

It’s been a lovely week however. We started the week with my birthday on Monday. I get the joy of teaching a challenging Year 6 class on Mondays and it wasn’t a great start to the week, or a great way to spen my birthday but it was OK. We had a good history lesson learning all about WW2 leaders – they had to investigate how countries were aligned (Allies vs Axis) and then had to use the iPads to research and write a biography of one of the leaders. I’m hoping to use this information to facilitate a debate in a few weeks time. These plans are still in work though! We then had the first of 2 twilights after school. We’ve recently bought the Abacus scheme of work for maths so we needed some training – Monday after school and Tuesday after school. I learned more on the Tuesday than I did the Monday, but both nights were interesting. It was informative, my brain was ready to explode after the Tuesday night!

This week seems to have lasted forever. After Monday and Tuesday going on forever I hoped the rest of the days would go smoothly but it was not the case!

I got to start my new intervention with some of our Y3 and Y5 girls. We’re using the Better Reading Partnership (BRP) scheme to try and boost the results of some focus children. I had 2 sessions with my 2 focus children and I thoroughly enjoyed it. Both of them were super pleased to be reading with me and they were both super keen to read and talk about books. One of them even asked me on Thursday (my intervention is Tues/Weds) if she could read with me again and was disappointed when I said that we wouldn’t be reading together again until next week. If only I had more time in my timetable to fit it in!

What else have I been up to this week?
Year 4 loved their science lesson! We were proving and disproving scientific theories. They were struggling at first (it sounds really difficult!) but once we did a few together they really got the hang of it. They were thinking about things like “all solids are hard”, “you can’t see any gases” etc and they loved having discussions with the adults in the room and their follow classmates to come up with examples to disprove the statements. We also had a go at biscuit bashing! One of them last week said “Miss, if you break down a solid you get a liquid” so I thought it would be a fun way to show that that’s not always true… it depends what you do to the solid. We have some experiements in the next few weeks with freezing and melting, which they’re super excited for.

Highlight of the week?
We have 2 BA students in Year 4 (they were BRP students helping us before Christmas and now they’re doing their paired placement with us and one of them said the loveliest thing to me on Friday.
“I can’t believe you’re not a teacher. You’re just naturally brilliant”.
That made my heart so happy.

I FINALLY got round to putting Year 4’s resolutions on the window too. It’s one of my favourite displays I’ve ever made I think. It says “Reach for the moon even if you fail you’ll land among stars”. All of the children made a resolution at the beginning of 2017 and I’m going to use this display to promote positive behaviour and to teach the kids that they can be whatever they want as long as they try. 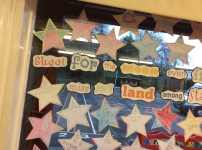 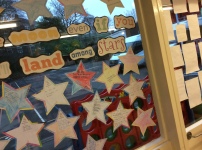 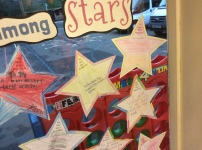 One thought on “This week…”