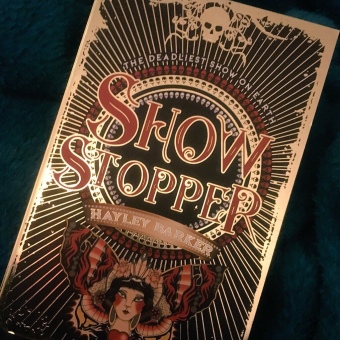 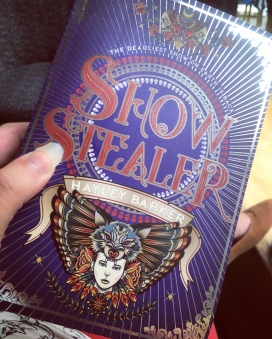 Show Stopper and Show Stealer is a duology written by Hayley Barker and I JUST ADORED THEM OK? I picked up Show Stopper a while ago based solely on the cover (just look at it man!) and once I had dived into the world of the twisted circus and got to the end, I needed the second one. I bought Show Stealer (the sequel) about 2 days later and immersed myself right back into the world.

Show Stopper:
Set in a near-future England where the poorest people in the land are forced to sell their children to a travelling circus – to perform at the mercy of hungry lions, sabotaged high wires and a demonic ringmaster. The ruling class visit the circus as an escape from their structured, high-achieving lives – pure entertainment with a bloodthirsty edge. Ben, the teenage son of a draconian government minister, visits the circus for the first time and falls instantly in love with Hoshiko, a young performer. They come from harshly different worlds – but must join together to escape the circus and put an end to its brutal sport.

I’ll try and keep this review as un-spoilery for both as possible!

In the world of these books, you’re introduced to a society of the Pures and the Dregs (yes, I couldn’t unsee the Six of Crows either!). The Pures are the rich and the Dregs are the poor. The Dregs live in the slums and do the menial jobs in the world of the Pures. If you’re an unlucky (or lucky, depending how you see it) Dreg, you might be taken in by the circus and be trained up to perform for the Pures. The Dregs aren’t treated well, but as they have no rights, this happens for the entertainment of the Pures. As the books progress, you see the inside of the circus and the deplorable ways in which the performers are treated.

I adored the circus setting. I’m well into books that are set in the circus (if you have any recommendations, please tell me because I am all about them… kids and YA please!) The setting is so brilliantly described in book 1, but in book 2 these descriptions are just taken to another level. The circus changes for the worse in book 2, so the descriptions get DARK to match the new look circus.

As well as the incredible setting, there’s a bunch of characters who will pull at your heart and make you angry and make you see the good in people and make you want to punch things and make you look at the world these people live in, as well as our world! I think it was the characters that made me fall into love with these books even more:
– Ben – he’s brave, honest and compassionate. You feel the real pull in Ben’s heart between what he has been taught and what he believes is right. I loved Ben a lot. He’s a very good egg. He goes against everything he’s ever known because he sees an injustice happening. I fell for him quickly.
– Hoshi – she’s fierce and fearless, particuarly where the people she loves are concerned. I loved seeing her growth. She’s like a Mama Bear. Hoshi is one of those characters that have so many layers – once you get under her skin there is still so much more to learn.
– Viviene – Ben’s mam, politician. This woman is just disgusting. Some of the things she believes and fights for are vitriolic and I genuinely despised her. We need to talk about her more, but I can’t help but get a little angry about her.
– Roger – Ben’s dad. I have quite different emotions for dad than mam. At first, I thought he had no backbone, but that changes. I can’t reveal why I have such a soft spot for him because MASSIVE SPOILERS, but trust me he is a good man.
– Silvio – the ring master of the circus. GOD THIS MAN. He’s an egomanic and true narcissist. He ONLY gets worse as the books go on too.
– Jack – he makes an appearance in book 1, but is pretty important in book 2. I adore him. He is an actual hero.

There are more characters than this… there’s some wonderful additions to the circus in book 2. I could talk about the characters in these books for many words, but I won’t!

(I wanna go and reread these books now! I miss these characters quite a lot)

One of the things that surprised me about these books were how politically driven they were. I didn’t expect to read these and think politics, but the politics of the world is one of the prevalent threads throughout and I quite adored it. There’s a lot to learn from these books. There’s many a comparison that can be made between these books and the world that we live in today. If people could just find in them a smidgen of compassion, like Ben, then we would have a much kinder world. We can change minds and we can be wrong, but we should ALWAYS be kind. Jack is one of the most important characters in these books. Please can we all appreciate him please? Books like these show that the good guys can win and that kindness will get you further than hatred.

My goodreads reviews of these books:

Ha. I love the Goodreads version of me.

Have you read Show Stopper or Show Stealer?
CAN WE TALK ABOUT THEM PLEASE?
Can you recommend any circus books?

Talk to me in the comments, or on twitter please! I need more people who love these books in my life!