This past weekend, my friend Kelly (over at Kelly’s Ramblings) decided we would get some of the samplers we got at YALC read! It was really tough choosing the 5 we would read but in the end we came up with these:

(I was in my trusty Starbucks, at the window, as usual on a Sunday!)

First up, we read Genuine Fraud by E. Lockhart. It was a great, very fast paced book. I was on edge the entire time reading the sampler! If the book is as fast paced as the sampler, I’m not sure my brain will be able to cope! The story seems to be very intriguing – a woman, who constantly changes her identity, running away from something and someone. The MC (Jule) is intense. I think she might be a polarising MC. I want to know more about her though, the glimpses we got I enjoyed. I will keep my eye out for this.

Next, we read Clean by Juno Dawson. I love the look of this sampler! It was so hard to get a picture of though. The thing that struck me was the interesting dynamic between Lexi and her brother. He’s trying to help her. She’s mean and devious and doesn’t want his help, whereas he SEEMS TO BE just trying to help (blackmail does help!). Reading it I was interested and then her age is brought up and I was VERY interested. There’s quite a bit of swearing in this and I LOVED IT. This one definitely peaked my interest – I have so many questions: why is she addicted to drugs? What happened? I will definitely be buying this as soon as it comes out!

The third sampler we read was Tangleweed and Brine by Deirdre Sullivan. I picked this up after hearing her talk at YALC in the Fairytale panel and knew I needed to read it. I love a good fairytale. This one is based on one of my favourite fairytales of all time… one which is SO UNDERRATED – Rumplestiltskin. It took me a minute to get into it, but once I was in I was HOOKED. I loved that there was some back story and the illustration at the end was creepy and perfect. The other thing that struck me was that the girl in the story was imperfect: she has this incredible hair but she describes herself in such imperfect words. This is definitely one I’m going to be watching out for: it’s so atmospheric and beautiful that it needs to be in my life. 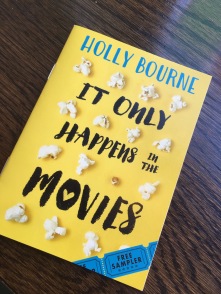 Then we moved on to one of our faves, Holly Bourne. This sampler is of her new book It Only Happens in the Movies. Holly is one of my faves, she always gets it right and this sampler shows that this book should be very much of the same. There’s a brilliant speech by the MC in the sampler about women in films and it is so spot on that I wanted to cheer. Women in films are NEVER imperfect. Holly always gets this right. I really liked LouLou too. She seems like she’s going to be a great character. I have a suspicious eye on Harry. I can’t wait for this to be out in October. It’s going to be a good one. I can feel it in my bones.

THE GRAND FINALE OF #SAMPLERSUNDAY.

For those of you who follow me on any of the social media you’ll know that Melinda Salisbury is my fave. When I heard there was going to be a sampler of her new (currently untitled) book #SorrowBook, I needed it. I needed it straight away. I have put off reading it because I knew that once I had read it, I would want to read the rest. And man was I right.

I won’t embarrass myself by showing you the texts between Kelly and I, but suffice to say we absolutely adored and devoured this sampler. I was hooked in the first page. “A bridge built of starlight” just had me. I absolutely love Mel’s ability to instantly create a world: I always get sucked in. This world is no different. I know this is going to be an incredible book – I have a feeling there is going to be some MAJOR event happening in the book and that Sorrow will grow up to be quite the young woman. I am VERY EXCITED and March can not come soon enough. I could ramble on about this for hours. Just know I loved it and that you need to get your hands on it… if you can! (side note: I found out today it’s a duology and YAAAAAAAAAS)

Did you pick up these samplers at YALC?
What did you think of them?
Which of these 3 are you most excited about?

Let’s talk! I want to know your feels about these and any other samplers you picked up at YALC. Talk to me in the comments or on twitter! While you’re at it… take yourself over to Kelly’s post and see what she thought of these samplers – clicky click